A high-level team of Indian officials arrived in Male on Wednesday and held talks with various stakeholders, including the Maldivian Foreign Minister, to resolve the situation arising out of ex-President Mohamed Nasheed taking refuge in the Indian Mission for the eight day in a row.

The main aim of the team is to "assist" the Indian high commission to resolve the situation, they said.

Meanwhile, the Maldivian court, which had issued the arrest warrant against Nasheed, cancelled Wednesday’s hearing after the police informed it that they would not be able to produce the former President at 4 pm.

The team arrived amid hectic diplomatic parleys being held by the Indian high commission with various political leaders across the spectrum.

Nasheed has been in the Indian Mission since February 13 to evade arrest after he failed to appear in court on charges of detaining Chief Criminal Judge Abdulla Mohamed while he was president, which his party considers politically motivated and designed to disqualify him from politics.

Maldivian President Mohamed Waheed's Press Secretary Masood Imad told PTI that following the expiry of the second arrest warrant, Nasheed is a free man and can come out of the Indian Mission without fearing an arrest.

However, he also added that if Nasheed continues to stay away from the court, then it can give a ruling in absentia.

Meanwhile, the Male City Council wrote to Indian High Commissioner D M Mulay seeking assistance from India to work towards a route to secure Nasheed's security and right to free and fair elections.

External Affairs Minister Salman Khurshid had on Tuesday said in New Delhi that India would be the "happiest" if the situation is solved.

"There is unusual stress caused by local conditions. We just wish them the best... I would certainly endorse any method and any means by which the present situation can be resolved," he said.

The minister added, "I think it is actually not a matter that gives any sense of satisfaction and if it gets resolved, we will be the happiest".

Meanwhile, Nasheed’s party, the Maldivian Democratic Party demanded a caretaker government to conduct up coming elections and end political tension in the islands.

Former Foreign Minister Ahmed Naseem said the Maldives should end political instability to avoid being used as a base for Islamic extremists to destabilise the region.

"We want elections under a caretaker who must take over two months before the actual polling," Naseem, who is on a visit to Sri Lanka, told reporters in Colombo.

The Maldivian government has announced elections on September 7.

Naseem said a boycott by the MDP, the largest single party in the archipelago of 330,000 Sunni Muslims, will undermine the legitimacy of any election.

"Three international shipping lanes go through our country and it is important for regional peace to have a stable government in the Maldives," Naseem said. 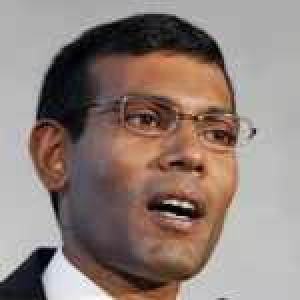 India will not ask Nasheed to leave its embassy

India in touch with Maldivian govt over Nasheed issue