Three persons, including a Muslim cleric, have been arrested in connection with the killing of 27-year-old man over a Facebook post in Dhandhuka town of Gujarat's Ahmedabad district, a senior police official said on Friday. Kishan Boliya was shot dead by two motorcycle-borne assailants in Modhwada area of Dhandhuka on January 25, when he was riding pillion on his brother's two-wheeler.

The police have arrested Shabbir Chopda (25), Imtiyaz Pathan (27), both residents of Dhandhuka, and maulvi Mohhamad Ayyub Javrawala (51), who is from Jamalpur area of Ahmedabad city, an official said.

Preliminary investigations have revealed that Shabbir, who was riding pillion on Pathan's motorcycle, had opened fire on Boliya, killing him on the spot, Ahmedabad superintendent of police Virendrasingh Yadav said.

"We zeroed in on Shabbir and Pathan after scanning the footage of CCTVs installed on the route, which showed the duo following Boliya on their motorcycle. Shabbir is quite radicalised and was in touch with a Mumbai-based maulvi, who asked him to be in touch with Javrawala," Yadav said.

During a religious gathering in Ahmedabad a few months ago, which Shabbir had attended, Javrawala had allegedly said that Muslims should not spare people who insult Islam, the official said.

On January 6, Boliya had shared a Facebook post, which Muslims found offensive and approached the police to take action, claiming it had hurt their religious sentiments. Based on a complaint, the Dhandhuka police had lodged an FIR against Boliya on January 9 and took necessary legal action, he said.

"However, Shabbir was not happy with the FIR and police action. So, he consulted the cleric and told him that he needed a weapon to teach Boliya a lesson for sharing that post. Javrawala then gave him a pistol and some cartridges. With the help of his friend Pathan, Shabbir shot Boliya dead on January 25," Yadav said.

Before killing him, Shabbir kept a secret watch on Boliya's daily routine and movements for four to five days, Yadav said, adding that the weapon used in the crime is yet to be recovered.

Meanwhile, Gujarat Minister of State for Home Harsh Sanghvi visited Boliya's native village Chachana in Surendranagar district on Friday and assured the family that the state government will give justice to the deceased, who became father to a baby girl just 20 days ago.

Angered by the killing, the Vishwa Hindu Parishad had given a call for a bandh in Dhandhuka on Thursday. 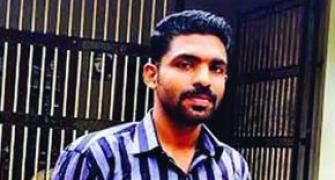