'We must all commit to sharing less nonsense and quarrelling less on social media.'
'We could use that time instead to meeting and speaking to our friends and family instead of 'liking' their posts.'
'Zuckerberg will be the poorer for that, but our lives will be so much richer,' says Rahul Jacob. 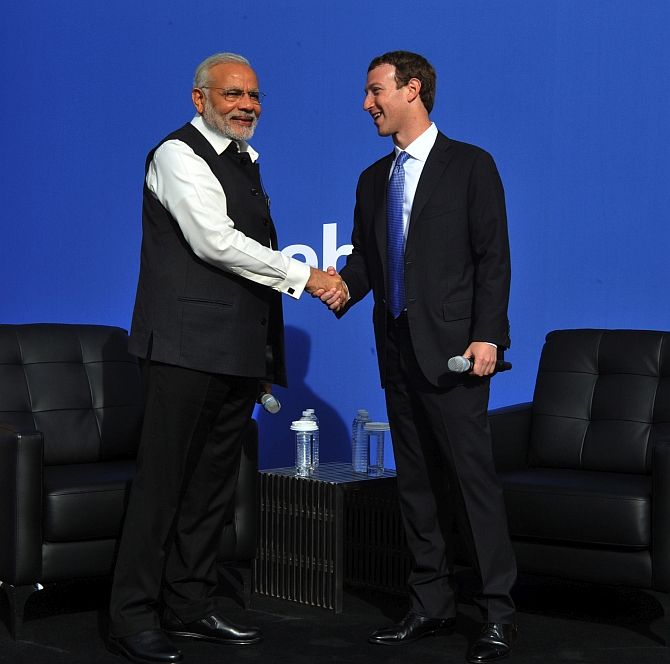 Little more than a year ago, Facebook founder Mark Zuckerberg published a nearly 6,000 word manifesto on how Facebook intended to build a global community.

Alternating saccharine-sweet PR-speak with techno-optimistic babble, Zuckerberg trumpeted that 'progress now requires humanity coming together not just as cities or nations, but also as a global community.'

In an age when both the United Nations and the World Trade Organisation appear weaker than ever, I am not sure I even understood what he meant.

Facebook's initial response to The New York Times's recent revelations about how the political propaganda firm Cambridge Analytica had used information mined from 50 million Facebook accounts to influence the US election was to stonewall.

Amid calls for Facebook to appear before the US Congress, the beleaguered firm is helped by the distraction that Cambridge Analytica represents.

The political consultants are a walking talking whodunit that features people straight out of a contemporised John le Carre novel.

The company's chief executive Alexander Nix seems as if he was recruited to play the villain in a Bond film; the whistleblower and a founder of the firm, Christopher Wylie, looks the part of a street kid taking on big business.

But Zuckerberg and Sheryl Sandberg, both of whom have been rumoured to have political ambitions themselves, are not going to escape this scandal without significant amounts of tar sticking to them and the company they have built. Regulatory action is likely.

Facebook's present problems are magnified because it appears to have known since 2016 of how Cambridge Analytica had harvested the information of 50 million users and not disclosed this publicly.

In addition, if foreign citizens Cambridge Analytica helped skew elections in the US, this would be a serious offence in the US.

Responding to repeated inquiries from the NYT, Facebook first downplayed 'the scope of the leak' of users' personal information before admitting that the giant company had been the victim of a 'scam and fraud,' according to a statement from Grewal on March 16.

In a speech a year ago in Hong Kong, Robert Thomson, chief executive of News Corp, attacked Facebook and Google for merrily making billions from monetising other people's content, all the while throwing their hands up and arguing it was not possible for them to monitor it.

After the Cambridge Analytica episode, the line of argument that otherwise all powerful algorithms cannot be used to reduce, say, racist content will not wash.

Facebook and indeed Google are going to have to hire internal editors/auditors needed to scotch or halt stories such as the one shared millions of times just ahead of the US presidential election in 2016 that Pope Francis had endorsed Donald J Trump.

Trouble is, because of the abundance of news Web sites, the weakening hold of quality media on the national imagination is leading to an epidemic of gullibility.

Soon after demonetisation, a Gujarati friend in New York forwarded me on WhatsApp a list of people supposedly caught with sacks of black money.

Not a single businessman was on it; it consisted of a tailor-made roster of politicians in the Opposition. And this not so merry go round continues unabated.

Hardly a week goes by without someone forwarding a sensational story, and they are often unsubstantiated.

If Google and Facebook have added to the problem on the Internet with their cheerful 'See no evil, hear no evil' approach to content, we are also up against leaders more prone to be economical with the truth than before.

Politicians have lied and exaggerated since the days of Caesar. What is different today is that they are brazen about it.

And three years ago, Bharatiya Janata Party President Amit A Shah seemed puzzled that anyone would take election claims to return Rs 1.5 million of black money to every bank account in India seriously.

As if speaking to a very slow-witted child, he patiently explained to ABP News that money did not just land in bank accounts like that.

Breaking up AT&T was easy by comparison to trying to rein in Google and Facebook -- and politicians.

How does one police lies and misinformation ahead of elections shared on WhatsApp?

We must all commit to sharing less nonsense and quarrelling less on social media.

We could use that time instead to meeting and speaking to our friends and family instead of 'liking' their posts.

Zuckerberg will be the poorer for that, but our lives will be so much richer.