Shahrukh, the suspect who opened fire at police personnel during violence in Northeast Delhi on Monday, has been detained, Delhi Police sources said. IMAGE: A protester brandishes a pistol during clashes between a group of anti-CAA protesters and supporters of the new citizenship act, at Jafrabad in northeast Delhi. Photograph: Ravi Choudhary/PTI Photo

On Monday, the police had identified the man in a red T-shirt, who had opened fire at the police, as Shahrukh.

Seven people have lost their lives in the clashes between pro and anti-Citizenship Amendment Act protesters that took place at various places in Northeast district of Delhi on Monday.

Shahdara Deputy Commissioner of Police Amit Sharma was also injured during the clashes between the two groups in Delhi's Gokulpuri. He underwent a surgery on Monday night and is now safe and out of danger. 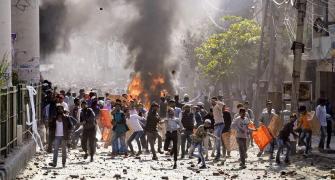