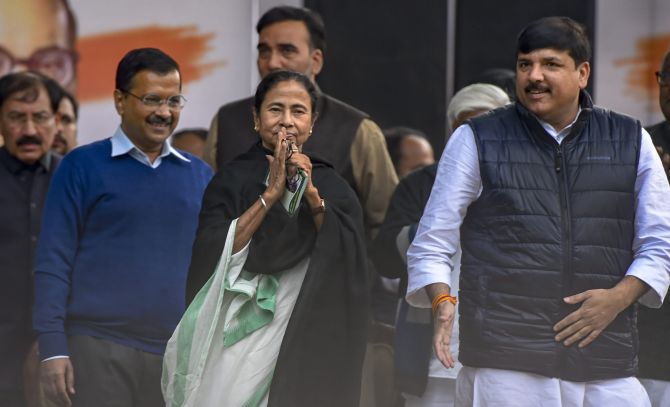 The Trinamool Congress supremo told reporters at the state secretariat that the invitation for the ceremony arrived on Tuesday and she would be attending it as "constitutional courtesy".

"I have spoken to a couple of other chief ministers and have decided to attend it.

"There are certain ceremonial programmes under the Constitution. We try to attend such events when we get an invitation for the swearing-in programmes of the president and the prime minister," she said.

The Delhi chief minister has been invited for the ceremony and he will attend it, a Delhi government official confirmed.

Banerjee's decision to attend the ceremony in New Delhi on Thursday, in which Modi will be sworn-in as the prime minister for the second consecutive term, comes after a heated verbal duel between the two leaders during the just-concluded Lok Sabha election.

He also accused her of running a syndicate that indulged in extortion.

The TMC chief returned the barbs, calling Modi "expiry babu", and charged him with failure on all fronts during the five years of his first term.

Reacting to Modi's statement in an interview that she sent him kurta and sweets at least once a year, Banerjee said at election meetings that she would send the prime minister "roshogollas" made of mud and pebbles which would break his teeth.

Besides winning 303 Lok Sabha seats on his own (the NDA tally being 352), the BJP came up with a surprising poll show in West Bengal by bagging 18 of the state's 42 seats, only four less than the TMC's 22.

Meanwhile, Banerjee made major changes in her cabinet on Tuesday in the aftermath of the poll results.