Since much of the voting was on religious lines, Mamata's rural focus became irrelevant.
Namrata Acharya reports. In roll call-like sessions, she often lashed out at top government officials and party workers over the progress of development works in full glare of the media.

The review meetings hold key to Mamata's style of administration, showing her strong connect with the rural masses.

Till November 2018, she had done 430 such meetings. In nearly eight years of the Trinamool Congress regime in West Bengal, rural areas have been the focus of successive budgets by the state government. Yet, the party faced a major defeat in the countryside while it retained urban seats.

According to analysts, since much of the voting in this elections was on religious lines, Mamata's rural focus became irrelevant.

Departments that saw massive increase in fund flow in the last eight years in the state include agriculture, panchayats and rural development, minority development, health, school education, land reforms and refugee relief and rehabilitation, among others.

At the same time, in some of the job-creating sectors like commerce and industry and information technology, the relative increase in fund allocation has remained low.

Bengal's budget for agriculture stood at Rs 315 crore in 2012-2013 when state Finance Minister Dr Amit Mitra presented the first budget of the TMC government. By 2019-2020, the allocation rose to nearly Rs 6,086 crore.

About a month before the NDA government at the Centre announced a yearly dole of Rs 6,000 to farmer, West Bengal announced Rs 5,000 annually per acre to farmer, along with a life insurance scheme of Rs 2 lakh.

In February this year, Mamata announced that the state would bear the full premium burden for the Bangla Fasal Bima Yojna, the state's own version of the Prime Minister Fasal Bima Yojna. Earlier, the state used to pay 80 per cent of the premium, with the rest being borne by the Centre.

Despite this, the TMC suffered a defeat in the agriculture-rich constituencies of Hooghly, and Bardhaman-Durgapur.

Minority development has been another area of major focus for the TMC government -- something which the BJP in the state made a major political issue about, as it blamed the TMC for appeasement politics.

Some of the projects aimed at Muslims include construction of boundary wall at graveyards, involving a fund of Rs 563 crore so far, construction of Haj House, with a project cost of Rs 100 crore, setting up of a Minority Bhavan -- a single window facility for the minorities for all government schemes -- in each district of the state.

The state has also set up Aliah University, a minority education institution, spread over 20 acres on a budget of Rs 257 crore.

However, the most politically contentious scheme of the TMC government remains that of providing financial assistance to imams and moazzins, about 63,378 in number.

The most successful welfare scheme of the TMC government has been the Kanyashree project, which also won several accolades, including one from the UN and replicated by other states.

Under the scheme, the state provides a one-time grant of Rs 25,000 once a girl reaches the age of 18 and continues her studies. The state also provides annual scholarship for unmarried girls aged 13 to 18 years enrolled in classes 8 to 12.

Also, the government provides free school bags, books, uniform and bicycles to students between classes 9 and 12.

Upbeat by the success of Kanyashree, the TMC later launched Rupashree, which doles out grants for the wedding of women.

In the area of food security, Bengal has been a top performer, as the government provides 5 kg of rice/wheat per month at the rate of Rs 2 a kg to the poor.

Among other success stories is the state's sanitation campaign--Mission Nirmal Bangla (launched in 2013, much before the central government started building toilets under Swach Bharat Mission). The state has built more than 6 million toilets in last eight years in rural areas.

Notably, when Mamata Banerjee came to power in 2011, reforms in government hospitals was one of the key agendas.

Some of the flagship schemes include setting up of fair price shops by the government. According to government data, till October 2019, a discount of a staggering Rs 1,304 crore was availed against 47 million prescriptions.

Launched much before its counterpart at the national level, Ayushman Bharat, under Swasthysathi the state provides insurance cover up to Rs 150,000 and up to Rs 500,000 in assurance mode.

Banerjee had accused Modi of 'hijacking' the state’s health insurance scheme, and taking credit by distributing pamphlets bearing Modi's name under the scheme.

While initially the state collaborated for joint implementation of Swasthyasathi and Ayushman Bharat, later it pulled out of the national scheme.

Banerjee's sore areas have been lack of industry and jobs in the state, forcing a large number of youth to migrate outside West Bengal.

While the TMC had lost its rural grip, it was able to maintain its seat tally, as it won urban seats like Dum Dum, North Kolkata, Jadavpur, South Kolkata and Barasat. 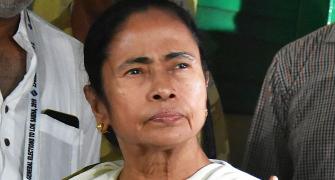