The Bengal government's decision to organise an extravagant felicitation function for the IPL V winners, Kolkata Knight Riders has created a controversy with several prominent political leaders and cricket experts questioning the wisdom of spending so much on the achievement of a domestic club side.

Bengal Chief Minister Mamata Banerjee handed over gold medals to players as well as support staff of the victorious KKR team at a grand felicitation ceremony at the Eden Gardens, watched by a capacity crowd.

Although no official figures were available on how much expenditure was incurred in organising the event, some TV channels reported that about Rs 45 lakh were spent on felicitating Bollywood superstar and KKR co-owner Shah Rukh and his team.

Some critics also felt that the celebrations were a little overboard as it was not the World Cup that KKR had won but only a domestic club tournament.

"I don't know what the celebrations were for, I was being told that gold necklaces were given to the players. According to me, IPL is no cricket at all, T20 cricket is no cricket. It was neither a World Cup nor IFA Shield or Ranji Trophy win," Dasgupta said.

"I don't see anything wrong in celebrating KKR's win. Cricket sells in India and people thoroughly follow IPL. I don't see any reason why people are criticising the felicitation ceremony. It was a good gesture on the part of Bengal government," he said.

Shah Rukh also defended Mamata, saying that there was nothing wrong in organising a ceremony to celebrate a grand victory.

'Bengal loves you' was the message which was inscribed on the medal which Mamata presented to the entire KKR team. On its part, the Cricket Association of Bengal also honoured the KKR players with gold chains.

People of all ages thronged the Eden since morning to join the grand celebration of KKR who bagged their first title in five appearances after beating two-time defending  champions Chennai Super Kings in the final on Sunday.

The 67,000-capacity Eden resembled a mini Kolkata with the galleries packed to the hilt well before the team entered their home ground.

The programme at the Eden Gardens began at 10.30 am with singers belting out Shah Rukh chartbusters, from 'Dard-e-Disco' to 'Main Hoon Don' as the crowd danced to the numbers, waving KKR flags.

Despite the hot and humid weather, the crowd waited patiently for the players to enter the stadium. Venky Mysore, the CEO of KKR team and coach Trevor Bayliss were among those on the crowded makeshift dais just outside the VIP Gate number five.

Team owners Shah Rukh Khan, Jay Mehta and Juhi Chawla arrived at the ground at around 11.45 pm. There were also a bevy of Trinamool Congress ministers, party leaders and CAB officials who were waiting with bouquets and garlands as they jostled for the limelight on the makeshift dias.
PTI
Source: PTI© Copyright 2020 PTI. All rights reserved. Republication or redistribution of PTI content, including by framing or similar means, is expressly prohibited without the prior written consent.
Related News: Kolkata Knight Riders, Shah Rukh, Mamata Banerjee, IPL, Cricket Association of Bengal
SHARE THIS STORY
Print this article 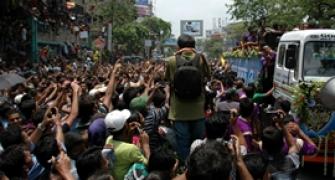 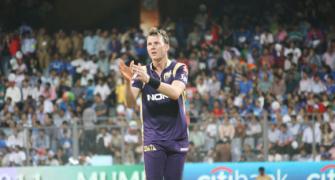 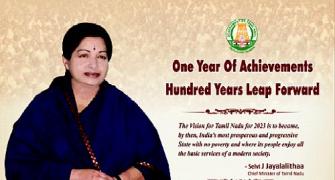 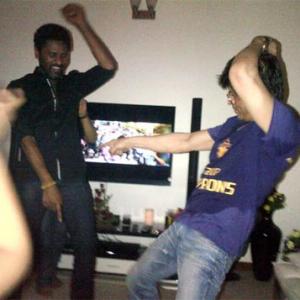