West Bengal Chief Minister Mamata Banerjee on Friday submitted a report to Prime Minister Naredra Modi on the damages caused by cyclone 'Yaas' in the state, and sought a Rs 20,000-crore package for redevelopment of the worst-affected areas. Modi flew down to Odisha earlier in the day to review the post-cyclone situation, and then made his way to Bengal, where the storm wreaked havoc in the coastal districts.

The state has incurred a loss of Rs 20,000 crore due to the cyclone, Banerjee claimed.

"We have sought a package of Rs 10,000 crore each for the redevelopment of Digha and the Sunderbans... It could well be that we might not get anything," she said following an administrative meeting held in the tourist town of Digha.

The meeting between the two leaders lasted for around 15 minutes, an official said.

The PM held a review meeting at Kalaikunda in Paschim Medinipur district to take stock of the post cyclonic situation.

Banerjee was supposed to attained the meeting. However, she arrived late by 30 minutes and handed him over reports of damage caused by the impact of Yaas.

Following this, she left for her prescheduled meeting at Digha.

"I do not know whether we will get the aid or not. However, I along with the chief secretary met the prime minister and handed over the papers.

"After that, I took his permission to leave for Digha to hold the administrative review meeting. We will do an aerial survey tomorrow. I believe a permanent solution is needed for this region. Every year this kind of cyclones hit these areas," she said in Digha.

Meanwhile, a release issued by the Prime Minister's Office said Modi has announced a financial assistance of Rs 1,000 crore for immediate relief activities.

'Rupees 500 crore would be immediately given to Odisha. Another Rs 500 crore has been announced for West Bengal and Jharkhand, which will be released on the basis of the damage.

'The Union Government will deploy an inter-ministerial team to visit the states to assess the extent of damage, based on which further assistance will be given,' it said.

The PM has also declared an ex gratia of Rs 2 lakh to the next of kin of the deceased and Rs 50,000 for those seriously injured in the cyclone, the release said.

Cyclone 'Yaas' rampaged through parts of India's eastern coast on Wednesday, killing at least four people and forcing more than 21 lakh people to be evacuated to safe shelters in West Bengal, Odisha and Jharkhand.

Heavy rainfall was reported at several places under the impact of the cyclone in all the three states on Thursday.

Hitting out at West Bengal Chief Minister Mamata Banerjee for skipping a meeting with Prime Minister Narendra Modi in the state on Cyclone Yaas, Bharatiya Janata Party president J P Nadda on Friday accused her of "murder of constitutional ethos and the culture of cooperative federalism."

Other senior leaders of the party also condemned her with Union minister Rajnath Singh describing her conduct as shocking and painful.

"This kind of behaviour with the prime minister, who arrived in the state with a sense of helping people of Bengal in the time of disaster, is painful. This is an unfortunate example of keeping political differences above public service and constitutional duties, which harms the basic spirit of India's federal system," Singh said.

Nadda said Modi holds the principle of cooperative federalism "very sacred" and has been actively working with all chief ministers irrespective of their party affiliation to give relief to people but unsurprisingly, he added, Banerjee's tactics and petty politics have once again come to haunt the people of Bengal.

"When PM Narendra Modi stands strong with the citizens of West Bengal in wake of Cyclone Yaas, Mamata ji should also set aside her ego for the welfare of people. Her absence from the PM's meeting is murder of constitutional ethos & the culture of cooperative federalism," he tweeted.

Singh added that this was a shocking development.

Chief ministers and prime minister are not merely individuals but institutions, he said. 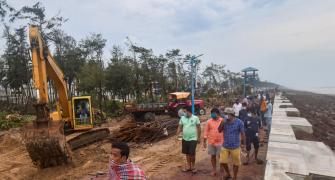 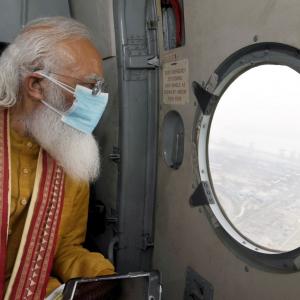