Surface temperatures have increased rapidly during the past century, leading to an increase in the frequency and intensity of tropical storms in the Arabian Sea, reports Sanjeeb Mukherjee. 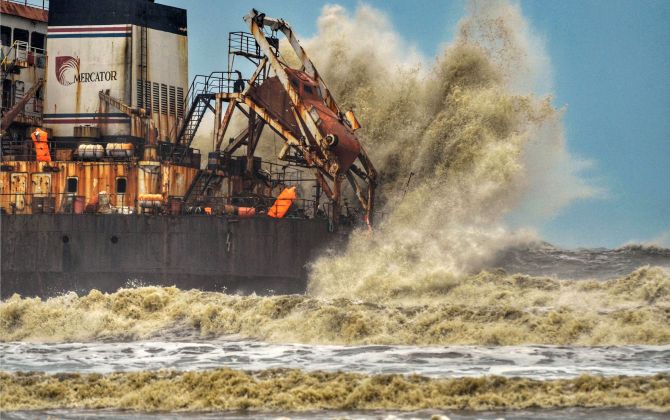 IMAGE: High waves generated by cyclone Tauktae lash the Bhagavathi Prem Sinken Dredger, at Surathkal beach near Mangaluru. With Cyclone Tauktae, this will be the fourth consecutive year of pre-monsoon cyclone over the Arabian Sea. Photograph: PTI Photo

Scientists and meteorologists have attributed the growing number of cyclones including the latest one, Tauktae, to climate change more so because of the intensity with which they have now started hitting the Arabian Sea.

According to a paper by Climate Trends, a Delhi-based agency that works towards bringing awareness around climate change issues and low carbon development, cyclones are fueled by available heat in the water bodies and the conducive temperature for the intensification of the cyclone is 28 degree Celsius and above.

The Bay of Bengal is usually warmer than Arabian Sea and therefore hosts more tropical storms.

However, the scenario is now changing, "as we have seen sea surface temperature increasing rapidly in the last century".

The paper said that as a result, SSTs in the Arabian Sea are over the threshold values which leads to active convection, torrential rainfall, and intense cyclones.

Recent cyclones like Ockhi, Fani, and Amphan have confirmed the trend as they have intensified from a weak cyclonic storm to an extremely severe cyclone in less than 24 hours due to exceptionally warm SSTs, the paper said.

Dr Roxy Mathew Koll, Scientist, Indian Institute of Tropical Meteorology, lead author, IPCC, Oceans and Cryosphere said that with Cyclone Tauktae, this will be the fourth consecutive year of pre-monsoon cyclone over the Arabian Sea.

This is also the third consecutive year when a cyclone has come very close to the west coast of India.

He added that climate projections indicate that the Arabian Sea will continue warming due to increasing carbon emissions, resulting in more intense cyclones in the future.

“Considering that both cyclones and floods due to heavy rains are increasing across the west coast along with a gradual rise in sea level, we need to be prepared,” Koll said. 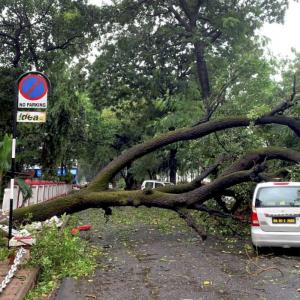 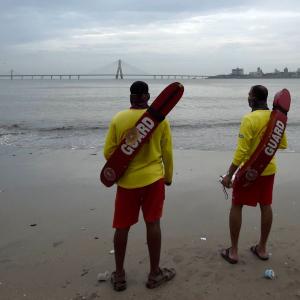