India on Saturday reported two more cases of the Omicron variant of COVID with a 72-year-old NRI man from Gujarat and a 33-year-old man from Maharashtra found infected with the new strain after they came from the "at-risk" countries of Zimbabwe and South Africa respectively taking to four the total number of such cases in the country. As states tighten curbs to keep the Omicron variant at bay, the Centre has advised them to undertake enhanced surveillance of international travellers and also monitor emerging COVID hotspots.

While Gujarat's Commissioner of Health Jai Prakash Shivhare confirmed that the elderly Non-resident Indian from Jamnager city has tested positive for the Omicron variant, Maharashtra health department director Dr Archana Patil confirmed that a man from Kalyan Dombivli municipal area near Mumbai was found infected by the potentially contagious variant. It was the first cases of Omicron of variant for the two western states.

The country's first two cases of the Omicron variant of COVID-19 were reported on Thursday in Karnataka--in a 66-year-old South African flyer and a 46-year-old Bengaluru doctor with no travel history and both men fully vaccinated.

The NRI man had arrived in Gujarat from Zimbabwe on November 28 and had tested positive for coronavirus on December 2, after which his sample was sent for genome sequencing, officials said. He was fully vaccinated against COVID, they said.

The man, who hails from Jamnagar, has been living in Zimbabwe since the last many years. He arrived in the state to meet his father-in-law. After he got a fever, his doctor advised him to get an RT-PCR test done. The private laboratory on Thursday informed the civic authorities that his report has come out positive for COVID-19, Jamnagar municipal commissioner Vijaykumar Kharadi said.

After that, the man had been shifted to the isolation ward at the Guru Gobind Singh Government Hospital, Kharadi said.

The district authorities had already started his contact tracing as per protocols, officials said.

Officials in Mumbai said the man from Kalyan Dombivli municipal area near Mumbai had arrived at the Delhi airport from South Africa via Dubai before flying to the western metropolis.

The 33-year-old man had arrived in Delhi on November 23 and had given his samples for COVID-19 testing at the Delhi airport. He had then taken a flight to Mumbai, official sources said in Delhi.

"After he tested positive, the sample was sent for genomic sequencing and has been found to have the Omicron variant of coronavirus on Saturday," the sources said, adding he has been isolated and all his contacts have been traced and are being managed as per protocol.

“A man from Kalyan Dombivli municipal corporation area has tested positive for the Omicron variant of COVID-19. He is the first official case in the state,” Maharashtra health department director Dr Archana Patil told PTI in Mumbai.

“He came with a group of four people. We are tracing and tracking them. Their RT-PCR test as well as genome sequencing will be done as well,” she said. More details are awaited but officials said the affected man had not received any vaccine dose against COVID.

As a debate rages over whether India should roll out the booster shots against COVID, scientists say that the country should prioritise double vaccinating its eligible population given the large number of people still to get the base layer of protection against the infection.

Concerns over the Omicron variant and waning vaccine-induced protection against the infection have highlighted the need for boosters to protect the most vulnerable. And while many countries have already started giving booster shots, several experts in India said the priority in the country has to be different given that large-scale immunisation programme began only six-eight months ago.

In advocating putting boosters on the back-burner for the moment, the experts' opinion runs counter to the Indian SARS-CoV-2 Genomics Sequencing Consortium (INSACOG) that has recommended a booster dose for those above 40 years in high-risk and high-exposure populations. The INSACOG is a network of national testing labs set up by the government to monitor genomic variations of COVID-19.

“We have a large proportion of our population in the below 18 age-group. Until that is achieved, a uniform policy for second booster, or a third dose, is not advisable,” immunologist Vineeta Bal told PTI, pointing out that large-scale vaccination in India began only in March 2021.

What we should focus on, she said, is fully vaccinating all the eligible population in India and pushing for vaccination of the under 18 age group on a large scale.

Vasant Nagvekar, a consultant on infectious diseases at a Mumbai-based hospital and a member of the Maharashtra government's COVID-19 task force, on Thursday said a booster dose of vaccine, even if it works, is just a temporary fix and the emphasis should instead be on mask use.

Amid growing concerns over the Omicron variant of SARS-CoV-2, a Parliamentary panel has recommended that the efficacy COVID vaccines must be evaluated and the government conduct more research to examine the need for booster doses to contain the new strain.

The Parliamentary Standing Committee on Health in its report to Parliament also said that concerns with regard to the new strain developing immunoescape mechanism should be critically addressed.

Health Minister Mansukh Mandaviya on Friday told Parliament that the Centre will move forward on the rollout of the booster shots only on the basis of scientific recommendations of its two expert groups on vaccine administration. The decision will not be based on economic or financial considerations, he said.

The Brihanmumbai Municipal Corporation (BMC), meanwhile, has mandated seven-day home quarantine of the passengers arriving in the city from "at-risk" countries.

In an order issued on Friday, the civic body said that during the home quarantine period, the staff from its ward-level COVID-19 war rooms would call these foreign returnees five times a day to ensure that they are following the protocols.

According to the Centre, the countries designated as "at-risk" are European nations, including the UK, and South Africa, Brazil, Botswana, China, Mauritius, New Zealand, Zimbabwe, Singapore, Hong Kong and Israel.

The Union health ministry, meanwhile, wrote to the governments of Karnataka, Kerala, Tamil Nadu, Jammu and Kashmir, Odisha and Mizoram to take necessary steps under the 'Test-Track-Treat-Vaccinate-Covid Appropriate Behaviour' strategy to control the spread of COVID-19 and reduce fatality.

The move comes in view of rising cases of the infection, weekly positivity rates and weekly deaths in some districts.

Referring to a letter sent to all states/UTs on November 27 in the context of the new Omicron variant, Union Health Secretary Rajesh Bhushan on Saturday said all states have been advised to undertake enhanced surveillance of international travellers, monitor emerging hotspots, prompt contact tracing of positive people, besides sending all positive samples for genome sequencing, early identification of cases and review of health infrastructure preparedness, and most importantly to focus on IEC and community sensitisation. 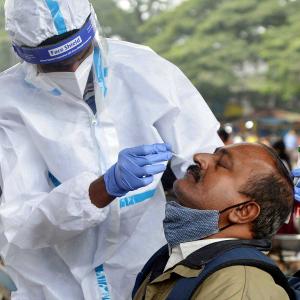