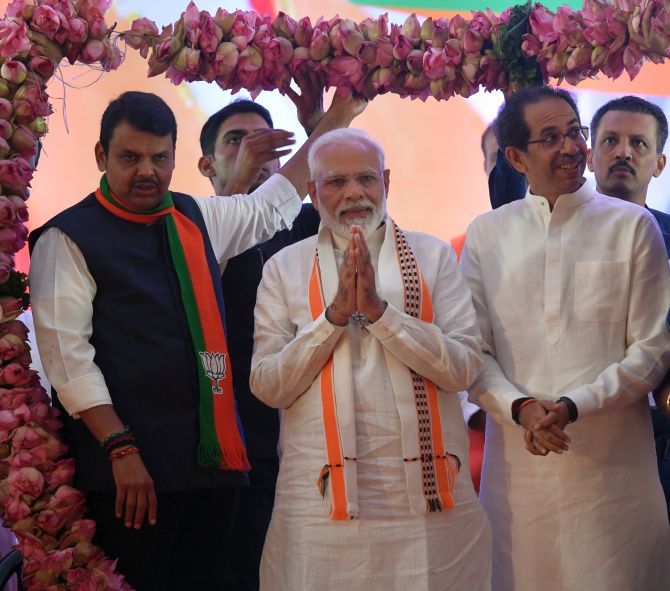 Prime Minister Narendra Modi said on Thursday that people of Maharashtra and Haryana have reposed their trust in the chief ministers of the two states and asserted that they will work even harder in the next five years to serve them.

Addressing party workers at the Bharatiya Janata Party headquarters, Modi described the party's performance in Haryana, where it failed to win a majority, as 'unprecedented' as he noted that its vote share in this assembly election has gone up to 36 per cent from 33 per cent in 2014.

The rise in vote share came even though it is believed that some amount of 'anti-establishment' is at work against the ruling parties during the elections, he said.

Though the BJP's share of votes has gone up, its seat tally fell to 40 from 47 in the 90-member assembly.

When governments often lose power after five years, it is remarkable that the BJP have been given a fresh mandate for five years in Maharashtra and Haryana, the prime minister said.

This shows people's trust in us, he added.

Both the chief ministers have won people's trust despite having no prior administrative experience when they took over in 2014, Modi said, adding, "People have put their stamp of approval on the works on these chief ministers."

Modi recalled his work as an organisational leader of the BJP in Haryana and said the party would often fight elections as a junior partner of one party or another in the state, and it will consider itself lucky if it crossed even 10 seats in assembly polls before 2014.

He also sought to underscore the party's rise in Maharashtra since 2014, noting that it used to be a junior partner to Shiv Sena before.

Political stability is a must for an economically important state like Maharashtra, he said, lauding Fadnavis' feat of completing his full term.

The BJP-run states work 'seamlessly' to implement central schemes while the opposition-ruled states are busier in renaming them, the prime minister added.

At the meeting, BJP president Amit Shah hailed the mandate, saying the party has won the first round of elections in the Modi 2.0 government.

He noted that both stated were never traditional BJP strongholds and they never had its chief minister in either of them prior to 2014. 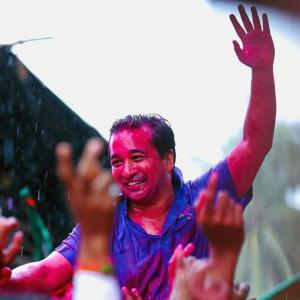