Maha to ensure 80% quota in pvt jobs for locals: Guv 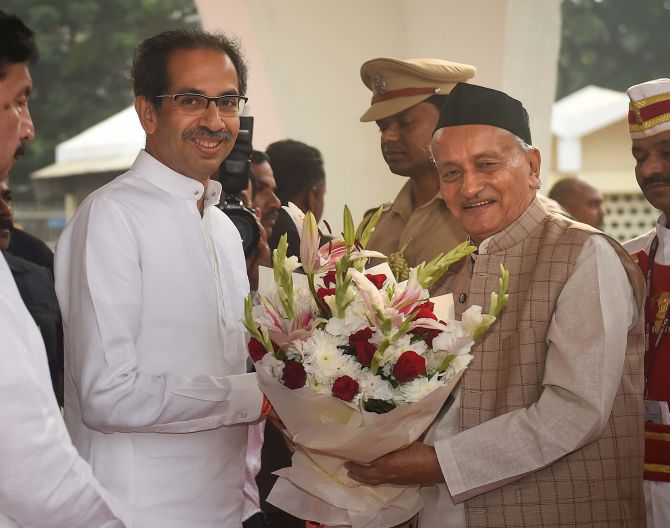 Maharashtra Governor B S Koshyari on Sunday said the Maha Vikas Aghadi (MVA) government is concerned over unemployment and it will enact a law to ensure 80 per cent reservation in private sector jobs for the 'sons of the soil'.

Koshyari made the announcement while addressing the joint sitting of the state legislature at Vidhan Bhawan in which he laid out the new government's broader agenda for the coming years.

He said the government would provide meal at Rs 10 to common citizens and build a super-speciality hospital in every district of the state.

'The Sena-NCP-Congress combine's Maha Vikas Aghadi government is concerned over unemployment. The new government will enact a law to ensure 80 per cent reservation in private sector jobs for the sons of the soil,' Koshyari said in a speech which he made in Marathi.

He further said the government will soon present a 'true picture' of the economic status of Maharashtra.

"That picture will broadly talk about the economic status of the state and its financial condition," he said.

"The government will set up centres to provide meal at Rs 10 in the state. Clinics will be set up where health screening will be done at the cost of Rs 1. Super-speciality hospitals will be constructed in every district," he said.

The governor also said appropriate measures would be taken to bail out farmers whose Kharif crop got damaged in unseasonal rains in November.

"Farmers from 349 tehsils in 34 districts of Maharashtra suffered crop loss due to untimely showers. Appropriate measures would be taken to ease their woes. This government will also work for providing appropriate remuneration to farmers' for their produce," he said.

Koshyari also said the government would try to offer education to women free of cost and build hostels for working women.

"A progressive society offers opportunity for the people. We will try to offer higher education for women for free. This government will also try to provide hostels for working women at all the district places," he added.

Koshyari said the new government will form a policy to attract more Information Technology (IT) firms to make investment in the state.

"To attract more investment in other industrial sectors, we will offer more facilities and better clearance services," he said, adding that the government will continue its efforts to efficiently enforce plastic ban across the state.

"This government will try to address the pending issues of OBCs and other communities. The issues of anganwadi and Asha workers will be addressed amicably," he added.