'The Maharashtrian Congressmen's decision to break away from their reluctant leaders in Delhi to side with the Shiv Sena is seemingly the first sign that the 'high command' is not as powerful as is believed,' says Amulya Ganguli.
Illustration: Uttam Ghosh/Rediff.com 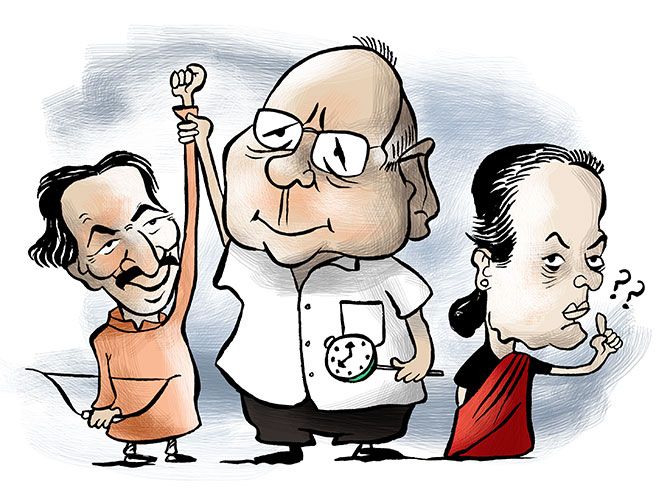 The pecking order among the individual winners in Maharashtra is clear.

On top is Sharad Pawar, who is now emerging as the foremost leader in the non-BJP camp.

No 2 is Uddhav Thackeray, the new chief minister of India's leading state in terms of business and films.

Bringing up the rear are the Congress leaders of the state -- Prithviraj Chavan and others.

Further down the line are the Congress leaders at the Centre -- Sonia and Rahul Gandhi.

They are at one remove from the Maharashtra scene, neither fully involved nor totally uninvolved.

Hence, their decision not to attend Uddhav Thackeray's swearing-in ceremony although the Congress is part of the government.

Their hope in keeping their distance is to ensure that their 'secular' image is not tarnished even if it is besmirched to a certain extent by the inclusion of Maharashtrian Congressmen in the government.

How successful Sonia and Rahul Gandhi will be in their 'I love you, I love you not' attitude towards the 'communal' Shiv Sena is not clear.

But it carries a tale about the Congress's approach to politics.

Its central feature is indecisiveness.

The party cannot quite make up its mind about anything, whether it is the economy or its tactics for dealing with the BJP's challenge.

Hence, its recourse to 'soft' Hindutva, exemplified by Rahul Gandhi's temple-hopping when a major election is due.

Or, using the Left-leaning National Advisory Council led by Sonia Gandhi to scuttle Manmohan Singh's economic reforms with one of the NAC members, Aruna Roy, bemoaning the then prime minister's emphasis on growth.

With the party's 'mind' at sixes and sevens, it was hardly surprising that the Congress took an inordinately long time to decide on supporting the Shiv Sena, giving ample time to the far more surefooted BJP to strike.

It is another matter that the Narendra Damodardas Modi-Amit Anilchandra Shah duo mishandled their midnight coup.

But they might have got away with their dirty tricks if Ajit Pawar hadn't lost his nerve on seeing how his redoubtable uncle, Sharad Pawar, was succeeding in keeping the Nationalist Congress Party flock together.

The BJP cannot complain that the Congress did not give it a chance.

The Maharashtrian Congressmen's decision to break away, so to speak, from their reluctant leaders in Delhi to side with the Shiv Sena is seemingly the first sign that the 'high command' is not as powerful as is believed.

It can be compelled sometimes to yield ground to provincial satraps.

Such a turn of events recalls what the Congress was in Jawaharlal Nehru's time when a galaxy of top leaders in Delhi was matched by equally formidable party men in the states.

It was Indira Gandhi who emasculated the state-level leaders.

But the Maharashtra developments show -- as Amarinder Singh and Siddaramiah did earlier -- that the provincial leaders are asserting themselves.