Maharashtra Governor Bhagat Singh Koshyari was denied permission to use a state government aircraft to travel to Dehradun on Thursday, triggering a row and inviting a strong criticism from the opposition Bharatiya Janata Party which sought an apology over the incident. 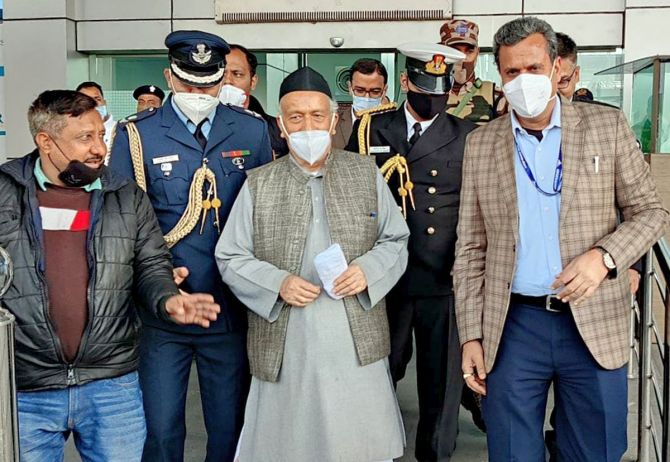 Koshyari was scheduled to travel by a state government aircraft to Dehradun and on getting on-board, the governor was informed that permission for use of the plane had not been received, a statement from the Raj Bhavan said.

The governor later took a commercial flight from the Chhatrapati Shivaji Maharaj International Airport to travel to the capital of his home state of Uttarakhand, it said.

The Raj Bhavan secretariat and the state government sought to blame each other for the incident, which added a new chapter in the uneasy ties between the ruling coalition, comprising the Shiv Sena, the Nationalist Congress Party, the Congress, and the governor.

The Raj Bhavan statement said the governor's secretariat had written to the government authorities seeking permission for the use of the aircraft "well in advance" on February 2.

The office of the chief minister was also informed about it, the statement said.

However, the Maharashtra government said the Raj Bhavan secretariat had been informed a day earlier by the Chief Minister's Office that approval for use of the official aircraft has not been given.

A statement from the CMO said the state government had taken serious cognisance that the official concerned at Raj Bhavan did not apprise the governor about the communication from the government (denying nod to use the aircraft).

"The Raj Bhavan official did not confirm about the approval for use of official plane and plan the Governor's travel schedule.

"The Chief Minister has issued directives that responsibility be fixed on the Raj Bhavan official concerned after taking serious cognisance of the developments," the CMO statement said.

It said the Raj Bhavan secretariat should have confirmed about availability of the official plane since non- approval for same was communicated a day earlier.

"Due to this the governor had to face inconvenience. The state government is not to be blamed ," the CMO said.

It admitted that the Raj Bhavan secretariat had sought permission for use of the official plane.

"On February 10, the CMO communicated that no permission was given for use of the plane. The Raj Bhavan secretariat was expected to check on the permission and then bring the governor to the airport," the CMO statement said.

Sources in the Raj Bhavan, however, said, It did not receive any communication in this regard from the state government at any level.

According to the Raj Bhavan statement,Koshyari is scheduled to preside over valedictory function of the 122nd Induction Training Programme of IAS officers at the Lal Bahadur Shastri National Academy of Administration at Mussoorie in Uttarakhand on Friday.

He was scheduled to depart from the Mumbai airport for Dehradun at 10 am on Thursday, the statement said.

Koshyari will travel to Mussoorie from Dehradun.

"Today, on 11th February 2021, the Honble Governor reached the CSMI Airport at 1000 hrs and boarded the government plane.

"However, the Honble Governor was informed that the permission for the use of Government Aircraft had not been received," the statement said.

As directed by the governor, tickets for Dehradun were booked immediately for him on a commercial aircraft leaving Mumbai at 12.15 pm and accordingly, he left, it said.

Meanwhile, a video clip surfaced on Thursday evening in which Koshyari is heard saying in Dehradun, Did not get (to use the government) plane for some reasons. So, came by another flight.

To a question whether permission was denied to use the plane as his trip is private, Koshyari said, How come the felicitation of IAS officials could be a private visit?

While the Shiv Sena said the government had followed all laid-down norms in disallowing the governor to use the state-owned plane, the opposition BJP demanded an apology from the ruling Maha Vikas Aghadi (MVA) over the incident.

The BJP accused the MVA government of being "egoistic" and indulging in "childish acts".

When asked about the incident, deputy chief minister Ajit Pawar said he had no clue.

"I will take details on reaching the Mantralaya (state secretariat) and only then will be able to say anything," the deputy chief minister said.

If the state government has purposefully denied permission, it is a "blot" on the state's reputation, he said.

"If this embarrassment is not intentional, then the state government should suspend the official who failed to issue the flying permission in time to the governor," he said.

The government should apologise and avoid further escalation of the issue, Mungantiwar said.

Fadnavis alleged the state government has insulted a constitutional post.

"It is an unfortunate incident. Such an incident had never happened in the state earlier. Governor is not a person, it is a designation. People come and go, but the designation stays," the former chief minister said.

The governor is the head of the state. In fact, it is the governor who appoints the chief minister and his cabinet, Fadnavis pointed out.

"The government should understand that it is insulting a constitutional post," the former CM said.

Defending the government, Shiv Sena leader Sanjay Raut said it had followed all norms in disallowingKoshyarito use the state plane for his visit to Dehradun.

Rejecting the BJP's charge that the government has insulted the governor, Raut told reporters in Delhi that there was no politics involved in the incident.

"We respect the governor. The government has upheld the Constitution... This is what I gather from my conversation with chief minister Uddhav Thackeray," Raut said.

"If the governor wants to use the government plane for private work, then there are some rules and had the government violated those rules, it would have been in the dock," the Sena MP said.

Notably, state Congress chief Nana Patole on Wednesday said the MVA government has decided to move court over the 'delay' by the governor in appointment of nominated members to the Legislative Council.

In the first week of November last year, the state government recommended 12 names for appointment to the Council under the governor's quota to Koshyari.

In October last year, during the coronavirus lockdown, Koshyariwrote a letter to chief minister Uddhav Thackeray, asking if the latter had turned "secular" since he denied permission at that time to reopen temples in the state.

The CM later said he does not need a "Hindutva certificate" from anyone.

During the pandemic last year, Koshyari also insisted on holding the final year exams of degree students in the state, but Thackeray at that time rejected the demand.