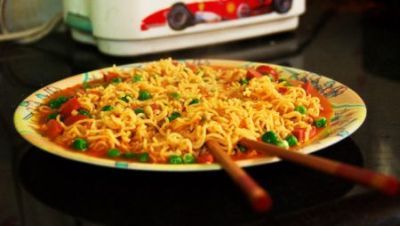 In fresh troubles for Nestle over safety standards of its famous Maggi noodle brand, the Uttrakhand Food Safety Department has collected samples of the 'two-minute' noodles from the company's Pantanagar plant and other places in the state.

The company is already facing problems in neighbouring Uttar Pradesh, where the food regulator FSDA (Food Safety and Drug Administration) had found higher than permitted levels of monosodium glutamate and lead in Maggi samples tested by it.

Now, the Uttarakhand state government officials have collected samples of the Maggi noodles from Nestle India's Pantnagar plant and other cities, including Dehradun, and have sent them to the state government laboratories for tests.

Maggi noodles came under the scanner last month after the UP Food Safety and Drug Administration asked Nestle India to withdraw a batch of Maggi noodles "which were manufactured in February 2014" after it found presence of non-essential taste enhancer MSG and high levels of lead in the samples.

Disputing the claim, Nestle India had said: "The company does not agree with the order and is filing the requisite representations with the authorities."

Meanwhile, the Union Food and Consumer Affairs Ministry has also asked the Food Safety and Standards Authority of India to look into the matter.

Besides, a class action suit can be initiated into the matter if a complaint with National Consumer Disputes Redressal Commission is filed, Consumer Affairs Minister Ram Vilas Paswan said last week.

"It is a serious issue. We have referred the matter to the Food Safety and Standards Authority of India. Under the current law, FSSAI has the power to take action, including imposing fine and hefty punishment," Paswan said.

On Saturday, a case was lodged against Nestle India in a local court in Barabanki (UP) here, while actors Amitabh Bachhan, Madhuri Dixit and Preity Zinta have also been separately dragged to the court for promoting Maggi brand.

While the case against Nestle India and five others was filed by the UP food regulator FSDA, a local advocate filed a separate case against the three cine personalities.

The UP FSDA had collected the samples from the Easy Day store in Barabanki and had sent the consignment for testing, which showed that the quantum of lead present was 17 times more than the stipulated limit, which is considered hazardous.

Dixit was also slapped with a notice by Haridwar Food and Drug Administration to explain within 15 days claims made in the advertisement regarding the nutrition value of Maggi.

The Bollywood actress said on Saturday she met officials of Nestle and they assured her that there would be no compromise on the quality of the popular snack.

"Like most of India, I have enjoyed Maggi noodles for years. I was very concerned after recent reports and met with the Nestle team," she tweeted.