A section of students of the Madras University continued their protest in Chennai for the third day on Wednesday against the amendment to the Citizenship Act. 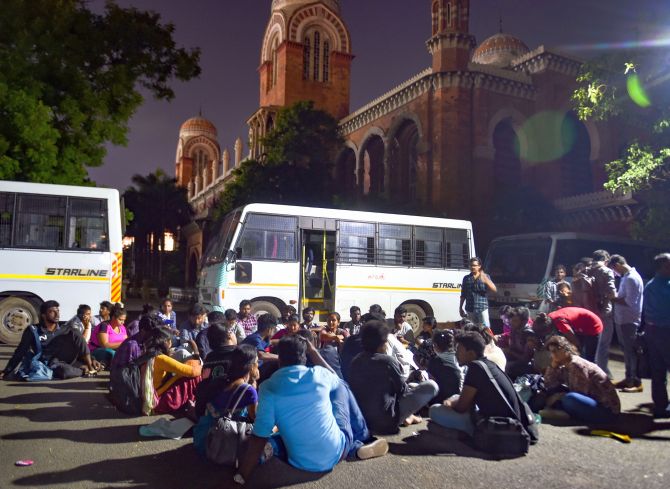 IMAGE: Students of Madras University during a silent protest against the Citizenship Amendment Act, at the university campus in Chennai. Photograph: PTI Photo

Defiant students said they will continue their agitation.

Meanwhile, police personnel continued to be deployed on the campus.

Police personnel, who had entered the campus on Tuesday, said they had done so for the "safety of the students."

Two students, who were picked up by the police were sent back on Tuesday night, one of the coordinators and a PG political science student, K Ragu Prasath said.

The two students were picked up for questioning over allegedly inciting students of affiliated colleges to join the stir at the varsity's Marina campus.

The varsity, according to the protesting students, has declared holiday till January 2.

Students, who sat near the main entrance of the sprawling campus, which is just opposite the famous Marina beach, raised slogans against the Centre, the Bharatiya Janata Party, the Rashtriya Swayamsevak Sangh and its student body, the Akhil Bharatiya Vidyarthi Parishad.

The protesting students are seeking withdrawal of the CAA.

They are protesting the police action on students of Jamia Milia University in New Delhi and opposing the nation-wide National Register of Citizens.

The Madras University is one of the oldest in the country and students of the varsity are among others in Tamil Nadu who have been protesting against the CAA. 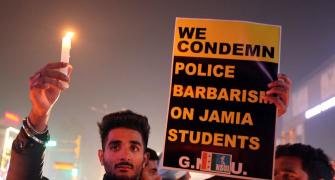