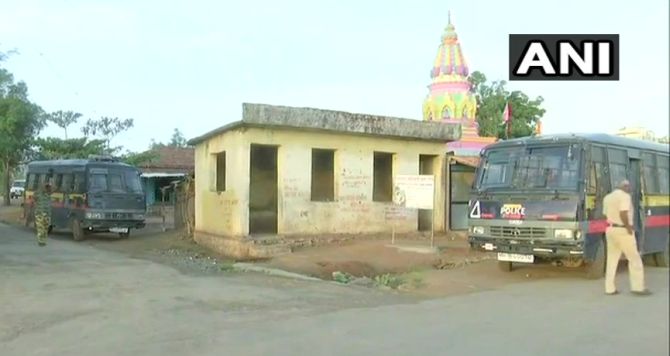 Rainpada, a remote village of Maharashtra which was the scene of brutal lynching of five men last week, has virtually turned into a ghost place.

In the village with a population of 750, only a few elderly people and some women can be spotted as the young men have fled in the wake of intensified police investigation into the lynching.

On Sunday, five tribals were lynched here by a large mob on suspicion of child lifting, an incident that shocked the nation as it was yet another case of brutality triggered by social media rumours.

According to videos which went viral, one of the five victims apparently tried to speak to a six-year-old girl after which they were pounced upon, stoned and thrashed with sticks and chappals.

The police has arrested 23 people so far and is looking for others who were involved in the incident in this remote village, located around 100 km from the Dhule district headquarters and bordering Gujarat state.

"Our men have left their homes since Sunday and there is no contact with them since. Only the women and a few elderly people are left here now," says 72-year-old Dagubai Gaikwad, a resident of the village.

She said since the young men have left, there is nobody to arrange for food and open water supply taps that bring water to the village.

This reporter saw most houses locked and the narrow lanes empty, with only cattle and livestock roaming around.

Vishwas Gangurde, a member of the panchayat samiti, said the village comprises about 750 people, of whom only a dozen old men and women are left.

"The young men, who fled the village, could not take their elders along with them as they are not physically fit. As a result, they are lying in their homes unable to even walk as they do not have the strength to do so in the absence of food," said 45-year-old Kalgibai Raut, another villager.

Rajubai Kokni, a teacher at the local school in the village, said out of the total of 102 students enrolled, nobody has turned up to study since the incident.

"I have been coming here since Monday morning but no student turns up. I sit idle all day and close the school at the end of the day," she said.

Kokni said her husband Rajaram too was arrested by the police when he was working at his farm on Sunday.

"Being a Sunday, I had accompanied my husband at the farm as well. We were sowing seeds there when out of nowhere the police personnel came and arrested my husband. I have not heard from him since," she said.

"The main perpetrators were from other villages. However, our men are suffering the most," she alleged.

Kokni said that being a Sunday, people from several adjoining villages had come to the weekly market in Rainpada to buy clothes, vegetables, soaps and oil on display.

Gounda Deshmukh, whose sister's son was arrested by the police, claimed he was picked up from outside a clinic where he had gone to take medicines.

"The police came and randomly caught people and put them in police vans. My sister's son had nothing to do with the lynching," she said.

Gangurde, a witness to Sunday's incident, said when the five men were taken to the panchayat samiti office for questioning, people from adjoining villages called up their friends and around 3,000 people gathered and indulged in lynching.

"We kept pleading with them not to hit the men but they accused us of taking money from them to save them. They did not want them (victims) to be handed over to the police but kill them there itself. We had to back out when they threatened to kill us too," he said.

Dhule Superintendent of Police M Ramkumar said his personnel were trying to distribute food material to the elderly and the women to ensure they do not go hungry.

"We are sharing with villagers the food cooked for our personnel," Ramkumar said.

Dhule lynching: Mob was so furious they wanted bodies to burnt on the spot