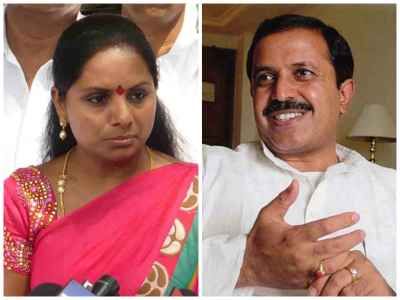 Sitting Congress MP Madhu Yaskhi Goud, who played a crucial role in passing the Telangana bill in Parliament, is up against TRS chief K Chandrashekhar Rao’s daughter. However, one cannot simply rule out the chances of E Lakshminarayana, the popular BJP leader who is also in the fray. Vicky Nanjappa reports.

The Nizamabad parliamentary constituency in Telangana is all set to witness a high-profile electoral battle. This is for the first time that Kavita, daughter of Telangana Rashtra Samithi chief K Chandrasekara Rao, will contest the Lok Sabha elections against sitting Congress MP Madhu Yaskhi Goud, considered one of the key players responsible for pushing the Telangana bill in the Parliament.

While it will be one of the toughest battles that Telangana will witness as there are two powerful candidates in the fray, one must not completely rule out E Lakshminarayana of the Bharatiya Janata Party, who is also contesting the same seat.

The Congress has bagged Nizamabad 11 times while the Telugu Desam Party has won thrice from here in the past.

The TRS contested this seat for the first time in 2009, but lost out to the Congress.

Goud, the Congress candidate, has an advantage in round one since he has won this seat twice quite comfortably. Moreover, he is also riding high on the Telangana sentiment and this is exactly his poll mantra when he seeks votes.

Kavita, on the other hand, is a debutante, but what works for her is that she is the daughter of the most popular face of the region. Her father Chandrasekara Rao will focus a lot on this constituency as it is a matter of pride if he can ensure that his daughter wins the elections.

While it appears to be a straightforward battle between the TRS and the Congress at Nizamabad, many would not rule out the chances of Lakshminarayana who by any standards is not a new face here. He has been associated with the Telangana BJP for a long time now and has been vocal about the separate statehood movement.

What makes him a contender is that he is a sitting MLA and had won the elections from Nizamabad urban assembly constituency by defeating powerful Congress candidate D Srinivas. He won the seat in 2009 and then resigned seeking the passage of the Telangana bill. He also contested the by-elections from here in 2010 and won by a margin of over 12,000 votes against Srinivas again.

The voter in Nizamabad is actually pretty confused. They are in a dilemma whether to thank the Congress for pushing the bill through or side with the TRS which has been a strong voice of the movement for over ten years now.

Both the Congress and the TRS appear to be confident of a win. Goud feels that the people will reward him since he had relentlessly pushed for the Telangana bill.

Kavita, however, claims that just pushing the bill is not sufficient. “The Congress has done nothing in the constituency and it is time to vote for the TRS and ensure development of the region,” she says.

The BJP is hoping that it could make the best of this fight and there is a good chance of the votes getting split.

“In Nizamabad, there is no caste factor or any such equation in play. The people want development and they will go with the party which is most likely to come to power in the state,” Lakshminarayana says.

Nizamabad, which is situated in the north-western region of Andhra Pradesh, is the gateway for the Godavari river. The constituency has a very low population and agriculture is the backbone here. The soil is extremely fertile thanks to the Godavari river. Despite the many plus points here the constituency is still considered to be economically backward and needs funds constantly from the Centre to sustain itself.

The people are quick to point out that the problems existed because Telangana was not a separate state till now.

“We have water resources and also major irrigation projects here such as the Ali Sagar, Nizam Sagar and Sri Ram Sagar irrigation projects, but we have not reaped the direct benefits from these. We are hopeful now that once the state is formed the new government of Telangana will reverse this equation and the constituency will see prosperity,” a local voter says.

In the meanwhile, the BJP candidate appeals that if people want development then he is the right choice since it is his party which will form the government at the Centre which would benefit this constituency.

But the Congress and the TRS counter this argument by stating that it is the state government, which will be formed by either one of them, which can propel development in this segment.

If one goes by the results in the 2009 assembly elections, it paints a very complex picture. The Telugu Desam Party holds three of the assembly seats while the BJP and the Congress have one each. The Praja Rajyam Party, which later merged with the Congress, has one.

The statistics would indicate that the BJP-TDP combine is at an advantage, but then that was 2009, and in 2014 the picture is completely different. The TDP is struggling here and many say this will rub of on the BJP too.

Most of these seats are likely to go to either the Congress or the TRS and this would reflect on the parliamentary segment as well.

Overall it looks like a hotly contested battle. For Goud, the battle is an easy one as he has many advantages. However, the entry of KCR’s daughter Kavita in the fray has only made the fight tougher for him and he is not taking things lying down.

He is hoping that Congress president Sonia Gandhi will visit the constituency and churn up the Telangana sentiment further which will help him a great deal.

Nizamabad is expected to see high-profile leaders in the days to come. Sonia Gandhi, BJP’s prime ministerial candidate Narendra Modi and KCR will address rallies here and this, according to the candidates, will only change the equation for them on April 30, the date of polling.

Image: TRS’s Kavita and Congress’s Madhu Yaskhi Goud are in the fray in Nizamabad. 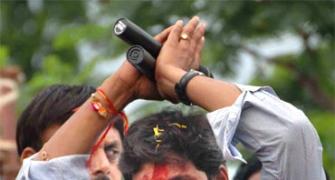 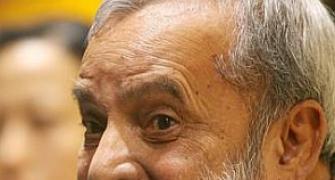 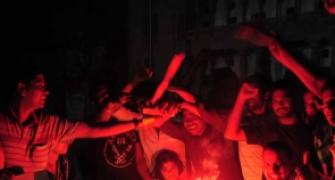 To delay or not to delay Andhra polls, wonders confused Congress Will KCR survive the acid test alone this time? 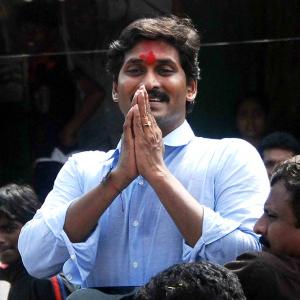