How parties LIED on their poll expenses The Association of Democratic Reforms in its lartest report has noted serious discrepancies between lump sum amount that political parties declared to have given to their candidates for election expenditure, and the actual amount received by the candidates. Vicky Nanjappa reports.

President Pranab Mukherjee was given Rs 15 lakh for his campaign during the 2009 Lok Sabha elections by the Congress but he declared he got no such sum. Similarly, Union ministers P Chidambaram, Sriprakash Jaiswal and others were given an average of Rs 10 lakh each by their party for election campaign, but they too denied receiving any such sum.

The Association for Democratic Reforms points out the discrepancy in this report.

Of the regional parties, a total of 15 MPs from 12 different parties and belonging to 9 different states have mentioned various amounts as received from their respective parties which do not match with the affidavits submitted by the parties.

Out of 123 MPs to whom the Congress has declared to have given lump sum amounts for election expenditure, 81 MPs have declared ‘NIL’ amount received.

Mukherjee, who was given Rs 15 lakh as declared by the party, has mentioned that no lump sum amount was received for his election expenses. Others include party stalwarts Subodh Kant Sahay, Jyotiraditya Scindia, Manish Tewari, Sachin Pilot, P Chidambaram, Beni Prasad Verma, etc.

The Bharatiya Janata Party, on the other hand, reports that they did not financially support even one winning candidate but 25 MPs declared that they received a total of Rs 2,75,49,383 (Rs 2.75 crore) from their party.

A total of Rs 3,45,50,000 (Rs 3.45 crore) was given by the Congress to its 33 ministers. 22 ministers have declared they received no amount while only 4 have declared the same amount as their party’s declaration.

Sriprakash Jaiswal (minister of coal), Dinsha Patel (minister of mines), Chidambaram (minister of finance) among 23 others have declared that they received no lump sum amount from their parties while Congress declared they gave a total of Rs 2.35 crore or an average of Rs 10 lakh to these 23 MPs, the ADR report stated.

Image: Supporters of the Congress attend a campaign rally in Gujarat’s Bardoli 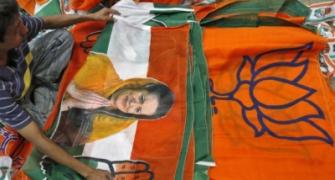 In UP, SP tops list of candidates with criminal record 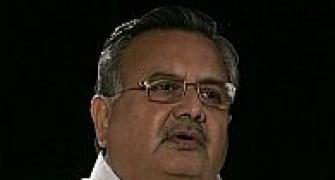 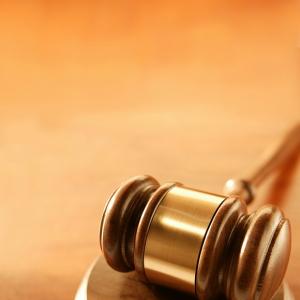