A political slugfest erupted between the Bharatiya Janata Party and the Congress in Jammu and Kashmir after a top Lashker-e-Taiba terrorist, overpowered by locals and handed over to the police, was reported to be an active member of the saffron party who was recently selected as its IT and social media cell in charge of the minority morcha in Jammu province. 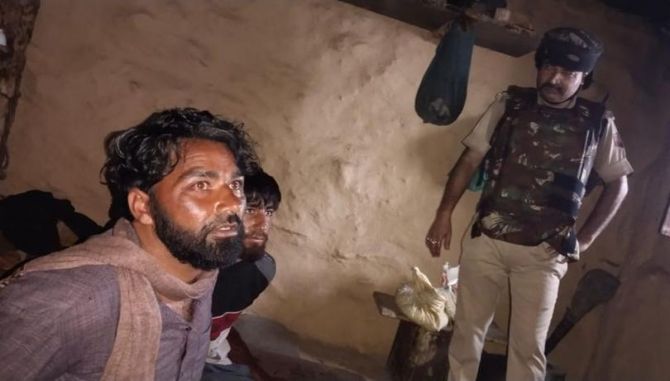 As the news about villagers overpowering Talib Hussain Shah and handing him and his associate Faisal Ahmad Dar to the police surfaced, purported pictures of Shah with JK BJP chief Ravinder Raina and his participation in party functions emerged on social media.

The pictures included the one where Raina was presenting him a bouquet and a letter issued by party leader Sheikh Bashir, assigning him the responsibility of new IT and social media incharge of Minority Morcha (Jammu province) on May 9

While Raina dismissed the presence of Shah in his party as a "conspiracy hatched by Pakistan to target him and the party headquarters", Pradesh Congress Committee chief spokesperson Ravinder Sharma said the ruling party should answer to the nation the alleged presence of terrorists in their ranks and holding important party positions.

This is a second incident within two days where it has been alleged that terror accused had links with the BJP.

The two people arrested in Udaipur were alleged by the Congress to have links with the Saffron party.

Congress leader Pawan Khera on Saturday had cited Facebook posts showing accused Riyaz Akhtari with local BJP leaders and sought to know whether the Centre had moved quickly to transfer the case to the National Investigation Agency due to this reason.

The charge was denied by the BJP's IT cell chief Amit Malviya saying the accused were not BJP members and said the opposition party was peddling in fake news.

Shah and Dar were in possession of two AK Assault rifles, seven grenades, a pistol and a huge quantity of ammunition when they were confronted by Muslim villagers and disarmed before handing them over to police after tying them with ropes inside a dhok (mud-house) in the higher reaches of Gulab Garh.

While lauding the people for assisting police in capturing the two most-wanted LeT terrorists, JK BJP chief said "they were part of a conspiracy hatched from Pakistan to target him and the party headquarters".

"He introduced himself as a journalist and took my interviews several times at my party office sometime back. He developed close liaison with party activists and leaders after coming to our headquarters (Trikuta Nagar Jammu)," Raina told PTI.

Raina claimed that he came to know from the security agencies that Shah was a mole planted by Pakistan-based terrorists to target BJP headquarters and the leadership including him.

"The arrest of the duo is a big success for the security forces as a major conspiracy of Pakistan has been thwarted. I also came to know that he had shared the pictures of the BJP headquarters with his handlers across the border," he said.

Raina said terror organisations, frustrated by BJP's expansion in Jammu and Kashmir, have repeatedly threatened him over in the past many years and since they failed to target him, they hatched a conspiracy to plant their activist in the BJP to target him and other leaders of the party.

However, he said BJP is determined to wipe-out Pakistan-sponsored terrorism from Jammu and Kashmir and "we will not be cowed down by threats or conspiracies".

The BJP chief claimed he was also told by the security agencies that Shah was keeping a close watch on his movement in the twin districts of Rajouri and Poonch and was passing the information to his handlers in Pakistan-occupied Kashmir.

"I have full faith in the training, ability and courage of our police and security forces who are determined to root out terrorism. With the arrest of Shah and his associate, the Pakistani conspiracy to target me has failed," he said.

Reacting strongly, the Congress chief spokesperson said "this is for the first time that such a thing had happened (when an office bearer of a party is directly involved in terrorism."

"BJP should answer to the nation about the presence of terrorists in their ranks holding important party positions. It is a very serious matter and a threat to the security of the nation," he said. 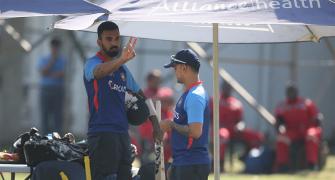 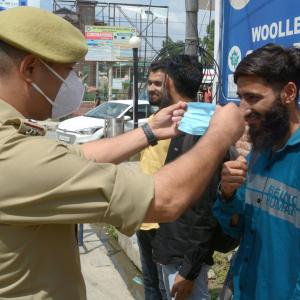 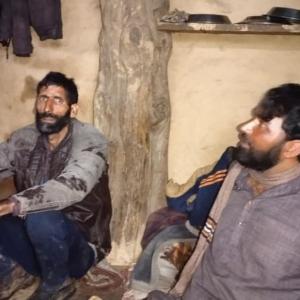