The Sri Lankan government on Monday enforced a countrywide curfew and blocked social media platforms to stop people inciting violence as communal violence spread to new areas in the island nation in the worst unrest since Easter Sunday bombings which killed nearly 260 people. IMAGE: A police officer searches a worshipper at the main entrance of the St.Theresa's church in Colombo. Photograph: Dinuka Liyanawatte/Reuters

Police also fired tear gas at mobs attacking mosques and shops owned by Muslims in various parts of the country.

"The curfew has been imposed from 9 pm tonight (Monday) to 4 am tomorrow (Tuesday)," a police spokesperson said.

Army chief Mahesh Senanayake said the troops have been instructed to deal very strictly with those who defy the curfew.

The army will shoot on sight if anyone defy the order, he added.

Earlier in the day, the police reimposed a curfew, few hours after it was lifted, on four towns of Kuliyapitiya, Bingiriya, Dummalasuriya and Hettipola in the north western region till 4 am on Tuesday following a communal clash in the area. It was later extended to the entire North Western Province as violence spread to other areas.

Prime Minister Ranil Wickremesinghe in an address to the nation said the military has been asked to quell the anti-Muslim riot and urged public cooperation to the security forces to bring the situation under control.

"The security forces have been given full powers to deal with those who violate the state of emergency and the islandwide curfew," he said.

He also appealed for calm urged the public not to be swayed by false information.

"I appeal to all citizens to remain calm and not be swayed by false information. Security forces are working tirelessly to apprehend terrorists and ensure the security of the country, but each time there is civil unrest, we increase their burden and hamper ongoing investigations," he said.

The Lankan government also reimposed a ban on social media following the violent clashes between the minority Muslim and majority Sinhalese communities.

The blockade of Facebook and WhatsApp comes a day after Sri Lankan police imposed curfew in the country's western coastal town of Chilaw where a mob attacked a mosque and some shops owned by Muslims in a dispute that started on a Facebook post by a Muslim shop owner.

The Muslim shopkeeper's comment was taken by local Christians as a warning of an impending attack.

The majority nationalist groups have been active on Facebook, reviving calls for boycotts of Muslim-owned businesses and spreading hate.

The recent violence is a fresh backlash from the Easter attacks where nine suicide bombers, including a woman, carried out a series of devastating blasts that tore through three churches and three luxury hotels, killing 253 people and injuring over 500 others.

Over 1,000 have been arrested since the attacks. Sri Lanka's police say they have either killed or arrested all those responsible for the bombings but that the threat of global terrorism persists.

President Maithripala Sirisena has vowed to eliminate the militants and restore normality in the country. 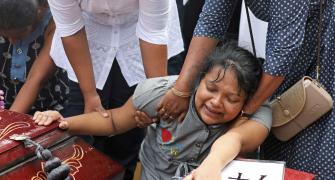