Dissatisfied with the steps taken by Uttar Pradesh government in the “brutal” murder of eight persons including four farmers at Lakhimpur Kheri, the Supreme Court Friday questioned the non-arrest of accused, directed preservation of evidence and mulled transferring probe to another agency, saying ”proof of the pudding is in the eating”. 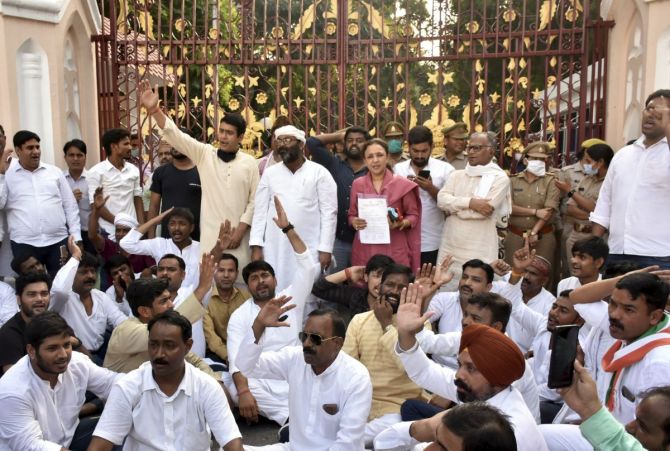 IMAGE: Congress activists protest demanding the arrest of the culprits in the Lakhimpur Kheri violence, in Lucknow, on Thursday. Photograph: PTI Photo

Without mincing words, a bench headed by Chief Justice N V Ramana said, “The law must take its course against all accused” and ”the government has to take all remedial steps in this regard to inspire confidence” in the investigation of ”brutal murder of eight persons”.

The UP government will have ”to make another pudding and make it palatable”, senior lawyer Harish Salve, appearing for the state, said, adding that whatever is done so far is not satisfactory.

He assured the bench that ”between today and tomorrow whatever is the shortfall (in the probe) will be filled up because the message has gone”.

In its order, the bench said: ”The learned counsel explained various steps which have been taken by the state government and the status report has also been filed to that effect. But we are not satisfied with the actions of the state.

“...counsel assures us that he will take all necessary steps to satisfy this court on the next date of hearing and he will also consider alternatives of conducting the investigation by any other agency. In view of that we are not inclined to go into details of this aspect. List this matter immediately after the vacation. Meanwhile, the learned counsel assured us that he will communicate to the concerned highest police officer in the state to take all necessary steps to protect the evidence and other materials related to the incident”.

The bench, also comprising Justices Surya Kant and Hima Kohli, hoped that the state government will take ”necessary steps because of the sensitivity of the issue”.

”We are not making any comments. Secondly, CBI is also not a solution for the reasons, you know the reasons...we are also not interested in CBI because of the persons who are...so it's better you find out some other mode. We will take up immediately after the vacation. But that does not mean that they should keep their hand off. They have to do. They must act..,” the bench said.

The top court questioned the soft approach of the police towards the accused (Ashish Mishra) named in the FIR after Salve said that a notice seeking his presence has been sent and he has sought some time.

’He was to come today and he has asked for time. We have asked him to show up at 11am tomorrow. If he does not appear tomorrow the rigour of the law will be brought into play against him,” Salve said.

”Mr Salve, these are very serious charges. We are not on merits of whatever it is... If you see the FIR which is filed by the counsel (of UP), this is an offence under Section 302 (murder) of the IPC apart from other sections.

"Is it the same way we treat other accused in other cases also. We send notice and say please come, please stay..,” the bench quipped.

Salve said he asked the same thing to them and they said that the post mortem report did not show any bullet wound that is why, they give him a notice for appearance under the CrPC and if the bullet wound have been there, then the course would have been different.

The CJI said: ”This is the opinion of the bench. We expect that there is a responsible government and responsible police officers and the system and when there is serious allegation of death (section 302), gunshot injuries, then the question is, can the other accused in the country be treated the same way. Please come. Please tell us...”

Salve said if allegations and evidence are true and the manner in which the car was driven leaves no manner of doubt that possibly it is a murder case.

”See there is a straight statement made by the eye witness, the person who has seen the incident,” the bench said, adding, ”Post-mortem report does not show the gun shot injury, is a ground for not taking the custody of the accused.”

The police have found two cartridges and it might be a case that the accused had a bad aim and he missed it and this is ”extremely serious,” Salve said.

The bench retorted: ”If it is extremely serious, then the way it's proceeding it seems it is not serious.”

Salve urged the bench to take up the case again on October 18 and assured that by that time, the actions would be taken and as per his instructions, ”needful will be done latest by tomorrow morning.”

”It appears that is only in words and not in action,” the bench said, adding, “Mr Salve, there is a saying that proof of the pudding is in the eating.”

”What is the message we are sending,” the bench asked, adding that the accused is apprehended immediately after registration of a murder case.

”I agree and I couldn't agree more,” said Salve, adding, "What has happened, happened. I am not saying no. I have been assured at the highest level that between today and tomorrow whatever is the shortfall will be filled up because the message has gone.”

The bench then dealt with the SIT set up by the state police to probe the sensational killings and said, ”We have seen your details of the SIT, which you have constituted... Who are the people in the SIT, you have your DIG, superintendent of police, circle officers, all local people and this is what happens when all the local people are there.”

The bench then inquired whether any request had been made by the state government to hand over the case to Central Bureau of Investigation.

Salve said no such request has been made and this aspect can be dealt by the court. "Please have this on reopening. If you are not satisfied with progress, hand it over to CBI.” The bench however said the CBI probe was not the solution.

Salve said: ”If I may borrow her Ladyship’s words then they will have to make another pudding and make it palatable... what they have done is not satisfactory. I will communicate this and hopefully by October 18, the lordship will see the actions.”

The bench raised objection to the continuance of present lot of officers with the probe and said that ”because of their conduct we do not see that good investigation will take place.”

Second thing is that they should not ”completely destroy” the evidence available, the bench orally observed, adding that ”by the time some investigative agency takes the case, please tell the DGP to take care of all necessary steps to protect the evidence".

”I will personally talk to the home secretary and the DGP and tell them they have to vindicate this faith. I do not want to say anything more,” Salve responded.

The top court posted the matter for hearing on October 20.

Four farmers were mowed down by an SUV in Lakhimpur Kheri when a group agitating against the Centre's three new farm laws was holding a demonstration against the visit of UP Deputy Chief Minister Keshav Prasad Maurya on October 3.

Two BJP workers and a driver were beaten to death allegedly by the angry protesters, while a local journalist was also killed in the violence.

An FIR under section 302 of the IPC has been registered against the Union Minister of State for Home Ajay Mishra's son Ashish Mishra and others in the incident in Tikonia police station but no arrest has been made so far.

Farmer leaders have claimed that Ashish was in one of the cars that allegedly knocked down the protesters but the minister has denied the allegations. 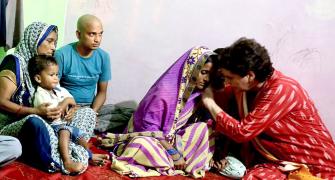 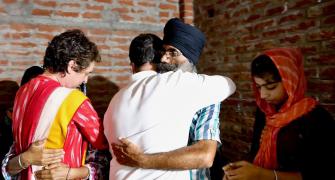 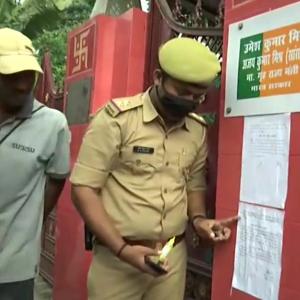 Ashish Mishra skips summons, may have fled to Nepal