The political war over charges of horsetrading escalated in Karnataka on Friday with chief minister H D Kumaraswamy releasing an audio clip in which state Bharatiya Janata Party chief B S Yeddyurappa is purportedly trying to lure a Janata Dal-Secular MLA for destabilising the coalition government. 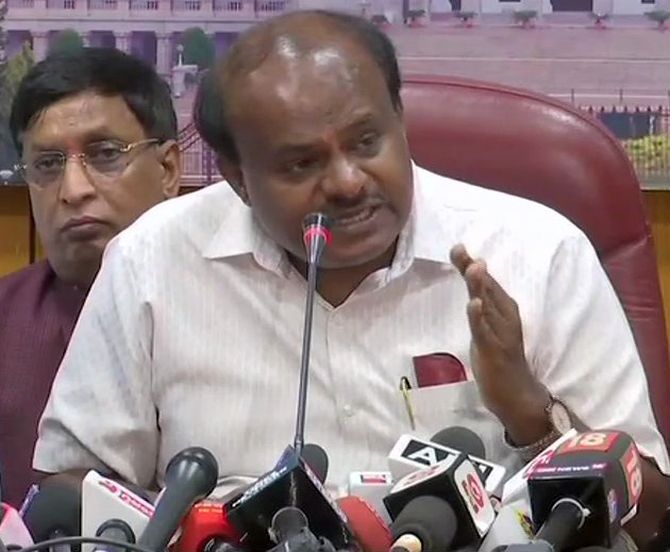 Yeddyurappa, who is at the vortex of the row over his alleged bid to poach the ruling coalition MLAs for the past few weeks, was quick to dismiss the clip as 'fake' and a 'concocted story'.

On a day of sudden twists and turns, the Congress decided to crack the whip and initiate action against four rebel MLAs of the party under the anti-defection law after they skipped a legislature party meeting in Bengaluru.

Lawmakers Ramesh Jarkiholi, Umesh Jadhav, Mahesh Kumathali and B Nagendra, who have remained defiant and skipped the Congress Legislature Party meetings on January 18 and on Friday despite a whip, would face action, CLP leader Siddaramaiah told reporters.

They were also among those absent from the assembly since the budget session began on Wednesday.

Besides the four, two MLAs had sought permission for their absence while suspended legislator J N Ganesh, booked on attempt to murder charge after a brawl with a lawmaker colleague recently, is absconding.

Siddaramaiah said he would write to assembly Speaker Ramesh Kumar seeking action against the four errant MLAs under the anti-defection law.

The four MLAs had sent letters to him, saying they could not attend the entire budget session of the assembly, he said.

The absence of several Congress MLAs had kept the ruling Congress-JD(S) coalition on the edge in the backdrop of BJP's reported aggressive moves to poach on the rival legislators.

The BJP has been denying the reports and asked the coalition partners to keep their flock intact instead of attacking it.

Kumaraswamy alleged that destabilisation efforts were being carried out with the 'permission' of Modi and BJP president Amit Shah.

"Without the knowledge of the prime minister, is it possible to do all this," an angry Kumaraswamy asked and said Modi should come clean on the issue.

"Modi and Amit Shah are doing all this", he alleged.

The chief minister said he would send the audio clips to Modi who, he said, claims about being 'the only saviour' of this country.

"Come out with your real face. Your friends (BJP in Karnataka) have exposed the real picture of your face. If you have any morality...," he told Modi and demanded the prime minister take appropriate action.

Kumaraswamy said that during the purported conversation Yeddyurappa had also spoken about a 'Rs 50 crore offer to book' the assembly speaker.

He claimed there were two audio clips of recorded telephonic conversation between Yeddyurappa and Sharan Gouda, son of JD-S lawmaker Naganagouda.

He alleged that the BJP leader was trying to woo Naganagouda with money and other offers.

Sharan Gouda, who was present with the chief minister, alleged Yeddyurappa reached out to him over phone for meeting him at Devadurga in his attempt to lure his father.

Only part of one audio clip, which was unclear, was played at the press conference.

In the clip, a male voice is heard offering money and ministerial berth, besides assuring Sharan Gouda about 'taking care' of the speaker and the judges in case of the anti-defection law being invoked.

"We have evidence to say it is Yeddyurappa's voice. We will send the audio clips to the laboratory," Siddaramaiah claimed.

Hitting back, an unfazed Yeddyurappa said Kumaraswamy had 'concocted' the story to hide his failures and inability to keep the JD-S and Congress flock together.

"It is a fake audio. I have not met anyone. Kumaraswamy is trying to hide his failures. This is a drama," the former chief minister said.

Yeddyurappa said he went to Devadurga to visit a temple and flew back to the city.

He claimed the Kumaraswamy government had lost the trust of the people and had 'no moral right' to continue in office.

Yeddyurappa dismissed a claim by the chief minister that he had spoken in the audio about a 'Rs 50 crore' offer to the assembly speaker.

"I will retire from politics if it (the allegation) is proved. If I had spoken like this (about the speaker), if it is proved, I will resign as an MLA and quit politics," he said.

In his media briefing after the CLP, Siddaramaiah said besides the four rebel MLAs, Ganesh was absent and two others -- Roshan Baig and B C Patil -- had taken permission to skip the meeting.

Karnataka has been reeling under political turmoil for the past few weeks that also saw the resort politics play out with both BJP and Congress sequestering their MLAs to shield them poaching bid. 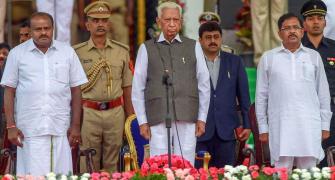