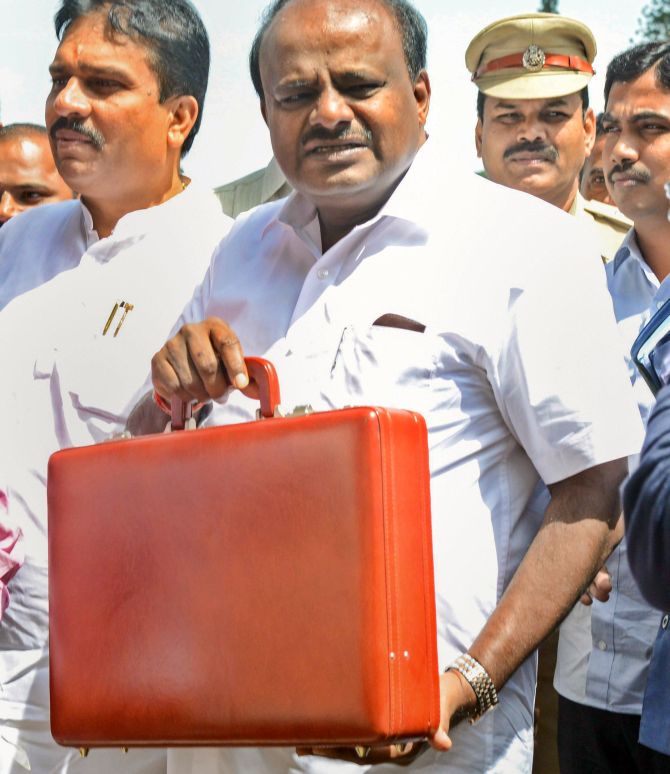 Keeping his pre-poll promise, Karnataka Chief Minister H D Kumaraswamy on Thursday announced a Rs 34,000 crore farm loan waiver, but in a contentious move proposed hike in taxes on fuel and power in the maiden budget of the Janata Dal-Secular-Congress coalition government.

Kumaraswamy, who holds the finance portfolio, said the increase in taxes on petrol, diesel, power and liquor was aimed at mopping up additional revenue to offset the burden on the exchequer caused by the farm loan waiver.

He, however, capped the agricultural loan to be written off at Rs 2 lakh, saying it would not be right to waive loans of higher value.

Kumaraswamy said all defaulted crop loans up to December 31, 2017 will be written off in the first phase.

The JD-S leader had, in the run up to the assembly polls, promised he would waive farm loans totalling Rs 53,000 crore within 24 hours of assuming office.

The chief minister said the quantum of loans paid by every farmer, who had not defaulted on repayment, or Rs 25,000, whichever is less, will be credited to their bank accounts.

The families of government officials and those of the cooperative sector, farmers who have paid income tax for the past three years and other ineligible farm loan recipients will be out of the purview of the scheme.

However, in a potentially controversial move, he proposed to increase the rate of tax on petrol and diesel by Rs 1.14 and Rs 1.12 per litre respectively. The tax on electricity will also be raised from the existing 6 to 9 per cent.

The Congress, which is playing a second fiddle to the JD-S in Karnataka despite having more than double the number of MLAs, has been hugely critical of the Modi government over frequent upward revision of fuel prices.

Congress president Rahul Gandhi had even thrown a “fuel challenge” to Prime Minister Narendra Modi after the latter accepted an online fitness dare from Indian cricket
captain Virat Kohli in May.

“Dear PM, Glad to see you accept the @imVkohli fitness challenge. Here’s one from me: Reduce fuel prices or the Congress will do a nationwide agitation and force you to do so. I look forward to your response,” Gandhi had written on Twitter using the hashtag ‘FuelChallenge’.

The Kumaraswamy government’s budget also proposed a four per cent hike in additional excise duty on Indian Made Foreign Liquor across all 18 slabs, besides a raise of 50 per cent in motor vehicles tax for private service vehicles. It will be based on the floor area.

These vehicles are constructed or adapted to carry more than six passengers and are ordinarily used by or on behalf of the owner for carrying people for, or in connection
with, his trade or business rather than for hire. It does not include a motor vehicle use for public purpose.

The chief minister said, in order to facilitate fresh loans to farmers, clearance certificates would be issued to them after waiving the arrears of the defaulting account holders. He said Rs 6,500 crore will be earmarked for that purpose.

He, however, insisted that despite deciding to accept the “big challenge” of waiving the farm loans, his government stood committed to fiscal discipline and will ensure there was no resource crunch for development projects.

Kumaraswamy said his government will continue with all programmes launched by his predecessor Siddaramaiah of the Congress.

“The budget reflects the stand of the coalition government, its dreams and realities, and difficulties and challenges,” he said in his speech.

The budget was presented after Kumaraswamy prevailed over the Congress, whose leaders, particularly Siddaramaiah, questioned the need for full-fledged budget when all flagship schemes of the previous government were to be continued.

Siddaramaiah, who now heads the coordination committee of the ruling alliance constituents, had said recently there was no need for a fresh budget and that a supplementary budget would be enough. However, Kumaraswamy insisted that every new government should come out with a fresh budget outlining its priorities.

In his speech, Kumaraswamy termed as the “beauty of democracy” the coming together of the JD-S and Congress, and claimed in the changing political scenario at the state and national level, coalition dispensations were becoming “inevitable”.

“In this background, we have accepted the reality and inevitability of a coalition government in the state.... comprehensive development of Karnataka will be achieved by following the principles of coalition dharma,” he said. 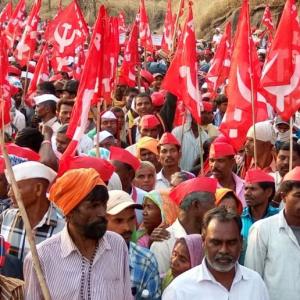