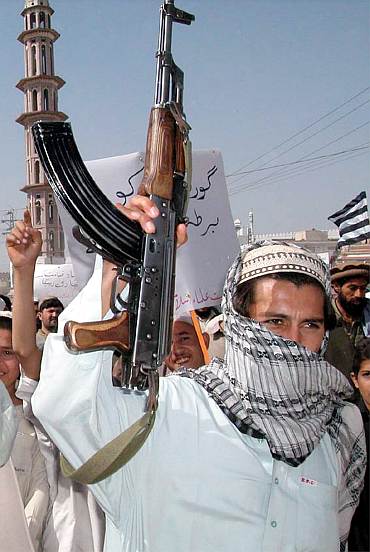 A young boy of around 15-16 entered Mandokhel Masjid in Khyber Agency through a window and exploded himself in the main hall during Friday prayers that resulted in the  killing of at least 55 people while another 123 tribesmen injured during this incident.

Friday's suicide attack in nothing new for the people of Khyber agency, as this part of the country has witnessed a number of such attacks over mosques, jirgas, security forces and other government installations.

Khyber Agency is one of the Pakistan's seven tribal agencies where sectarian violence and militant factions are playing havoc with the lives of local tribesmen.

These factions attack each other but in majority cases the poor tribesmen become the victims.

Militancy came to Khyber agency after the fall of Afghan Taliban regime when the United States invaded the country while chasing Osama Bin Ladin who was held responsible for  9/11 attack.

Tirah Valley, a strategic point in Khyber agency was unitised by Al-Qaeda members after leaving Ningrahar province of Afghanistan.

As the foreign militants came to the area slowly and gradually homegrown Taliban also emerged in Khyber agency. Haji Namdar was first person who founded AMNAM in the Tirah Valley, under the influence of Afghan Talban's ideology, to impose self-defined Islam over the locals.

Afghan Taliban leader Ustad Yasir was mentor of AMNAM and on his advice Namdar established an FM radio station to spread the message of 'Islam' in the area. A radical tribal preacher, Mufti Munir Shakir was assigned the role of an anchor to deliver religious sermons over the channel.

Another group AI emerged in the area who was Pir Saif ur Rehman, a Bralvi cleric who was residing here since long. Both the groups started hat campaign against each other on their illegal FM stations that were established at mosques.

Later on, differences emerged between Haji Namdar and his loyal cleric Mufti Shakir and the later after leaving AMNAM established his own group LI in 2004.

The newly-formed group of Mufti Shakir was also against the AI; so many tussles took place between these two. Slowly and gradually, members of the AMNAM joined LI, but both the groups never merged, and Haji Namdar faction is intact even today.

Clashes among these groups developed into a serious conflict, which prompted the tribes to act against these factions. Being the local Haji, Namdar remained in the area, while the non- locals clerics Rehman and Shakir were exiled for a time in 2005, this proved even more deleterious to peace in the area by bringing to the fore more militant commanders.

LI was taken over by Mangal Bagh Afridi, and it continued to clash with AI.

Under Mangal Bagh's leadership, LI became the most significant and organised militant group operating in Khyber, while AMNAM and AI were largely marginalised.

Until 2008, Mangal Bagh tended to portray LI as merely a reformist organisation fighting against criminals such as drug traffickers, gamblers, kidnappers and car thieves in the agency, but slowly it became a violent militant organisation.

In 2008 the TTP from Waziristan started establishing its hold on Khyber agency and the aim was to target North Atlantic Treaty Organisation supply tankers carrying fuel and other supplies for foreign forces via Torkham-Peshawar route.

When attacks over NATO tankers were reported in the area, the US pressured Pakistan to end militant factions in Khyber agency as due to unrest here it was almost impossible to use Torkham-Peshawar road for further supply.

Due to western pressure, Pakistan first banned AMNAM, LI and AI and then launched military operations against these groups.

All the three local militant factions considered TTP as a threat to their survival in the area, so they tried stopping Taliban fighters to use Khyber for attacking NATO supply line.

But for the TTP, stay in Khyber agency was important for the strategic objectives of the area. Gaining operational movement in Khyber would allow TTP to effectively disrupt NATO supplies to Afghanistan, which transit through Torkham in the Khyber Pass.

Yet the TTP had initial difficulty establishing its influence in the agency since three strong militant groups already existed in Khyber were against it.

The TTP used all its cards including sending Ustan Yasir to the area but it did not work; no one was ready to accept its total territorial domination. TTP finally started attacking all those who were against them; even Taliban conducted a suicide attack on a tribal jirga that killed more than 40 tribal chiefs.

The jirga was aimed to decide the fate of TTP in Khyber agency. Later on, the Taliban also assassinated Namdar for siding with the Pakistani state against the TTP in August 2008.

Looking towards the fate of Namdar, Bagh moved closer to the TTP in the latter half of 2008. Earlier during anti-Taliban drive, Bagh was helping the government but he totally changed his stance.

LI and TTP started becoming closer, and Bagh, for the first time, started attacking Pakistani security forces even outside the Khyber agency. A daring suicide attack on the US Consulate in Peshawar in April 2010 is one of several high-profile cases linked to LI.

Then the Taliban acquired the territorial domination in Khyber agency, since then they are using Tirah Valley as their headquarters and they plan all attacks from this particular area.

The LI is now totally under the influence of TTP, and the second also use Mangal Bagh resources. No one could dare to speak against the Taliban; no tribe or a person is pared, found at any anti-TTP or LI act.

Virtually, the TTP and the LI are ruling the roosts of Khyber agency these days.

Image: Supporters of a hardline party hold AK-47 rifles during a protest rally in Khyber Agency in the tribal area near Peshawar.