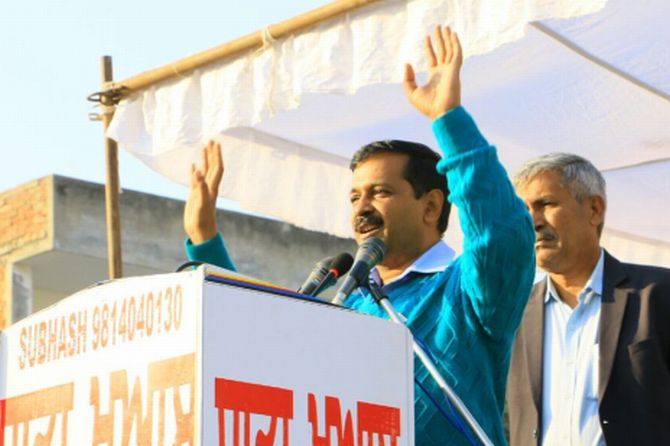 Aam Aadmi Party chief Arvind Kejriwal on Wednesday said the party’s chief ministerial candidate in Punjab will be from the state itself, scotching speculation that he was himself in the race.

“The chief minister of Punjab will be from the state itself,” he said while addressing a public rally at Badshapur in this district a day after Delhi Deputy Chief Minister Manish Sisodia told people in Mohali that they should vote assuming that it is to make Kejriwal the CM.

Sisodia’s remarks were latched on to by the Shiromani Akali Dal and the Congress which accused the AAP of trying to foist an ‘outsider’ on Punjab. However, Kejriwal on Wednesday said he will remain the chief minister of Delhi and he holds huge responsibility.

In the same breath he said, “Whosoever will be the Punjab chief minister, it will be my personal responsibility that all promises made by the AAP are fulfilled.”

He said people of Punjab can make him ‘personally accountable’ for all the works.

Punjab is going to polls on February 4.

Hitting out at Deputy Chief Minister Sukhbir Singh Badal, Kejriwal claimed that the SAD president woke up thrice from his sleep last night after having nightmares of him (Kejriwal) being the next chief minister of the state.

Referring to allegations against a chit fund company, he said the AAP will mortgage the properties of owners and get people’s money refunded.

On Tuesday, Kejriwal was virtually declared the chief ministerial candidate in Punjab by his party, injecting a new dimension to what is considered a three-way race in the assembly polls.

“You vote thinking that you are voting to make Arvind Kejriwal as the chief minister (of Punjab). Your vote is for Kejriwal,” Sisodia had said.

The AAP, which first captured power in Delhi in 2013 on the back of its civil society campaign against corruption, has been steadily making inroads in Punjab. It had won four Lok Sabha seats in 2014 but there has been infighting in the party.

Sisodia assured the people that Kejriwal would honour all the promises after coming to power.

“People were asking me who will be the Punjab chief minister. I want to say one thing here that you should believe that Arvind Kejriwal is going to be Punjab’s CM,” he had said.

He also said, “Whosoever will be the CM, it shall be the responsibility of Kejriwal to get all the promises honoured...I give you guarantee in this regard.”

Kejriwal claimed that Congress' election manifesto was a ‘lie’ and Punjab Congress chief Amarinder Singh has himself said ‘one has to lie before elections’.