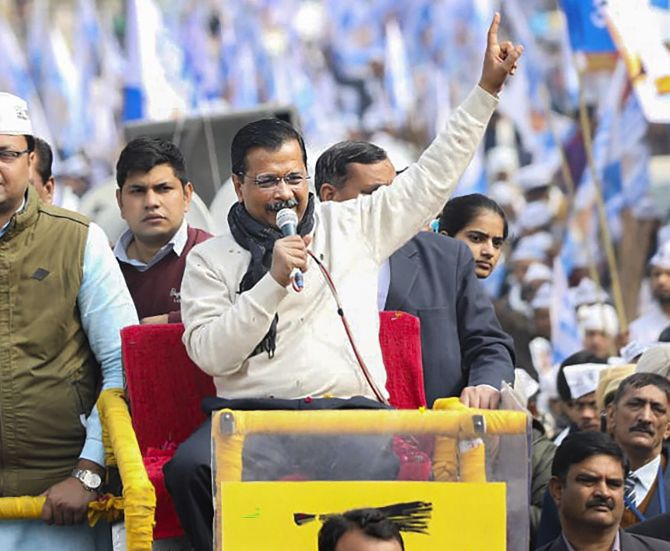 IMAGE:  Delhi Chief Minister Arvind Kejriwal during an election campaign roadshow in Kirari ahead of the assembly elections, in New Delhi, on Sunday. Photograph: PTI Photo

After releasing the manifesto at the party's office, Kejriwal said if the BJP doesn't do so by then, he will meet the press to announce his next course of action.

He said people want to know who would be the BJP's chief ministerial face, claiming that people are saying why they should vote for the BJP if it does not have the CM candidate.

"Delhiites want the BJP to declare its chief ministerial candidate. If BJP declares its CM candidate by 1 pm tomorrow, I am ready for a public debate with him and we will work out modalities for the same," Kejriwal told reporters on Tuesday.

The AAP chief said the BJP can decide place for the debate, adding that in democracy, people should have a chance to ask a question.

By withholding the name of CM candidate, senior BJP leader and Union Home Minister Amit Shah is demanding a 'blank cheque' from the people of Delhi, he said.

Shah is telling people that he will fill up the name of the chief minister on the cheque later, if the saffron party gets Delhi's mandate, Kejriwal said.

"In democracy, the chief minister is chosen by people not by Amit Shah... What if Amit Shah names some uneducated person for CM post, which will be a betrayal to the people of Delhi," the AAP chief said.

"I ask people everywhere that your one vote will directly go to Kejriwal. People want to know where their vote will go if they support the BJP in the election. If they don't have a chief ministerial candidate, it means people's vote for BJP will go waste," he said.

The AAP and the BJP -- apparently the two main players in the polls -- have been fighting a bitter electoral contest in Delhi.

They have accused each other of skirting 'real issues' and focussing on rhetoric.

The AAP targeted Delhi BJP chief Manoj Tiwari and the saffron party later hit back by directly taking on Kejriwal. 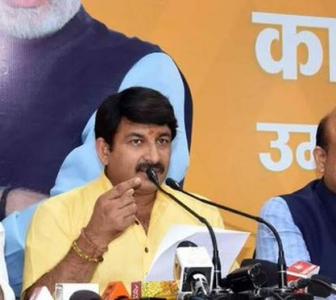 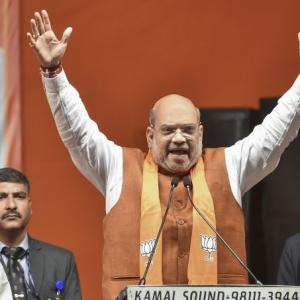 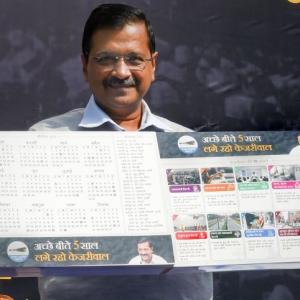