In an unending battle of nerves, the Karnataka assembly was adjourned till Tuesday without voting on the confidence motion moved by chief minister H D Kumaraswamy even after three days of debate, amid ruckus by the Congress and the Janata Dal-Secular, which insisted voting can await the Supreme Court ruling. 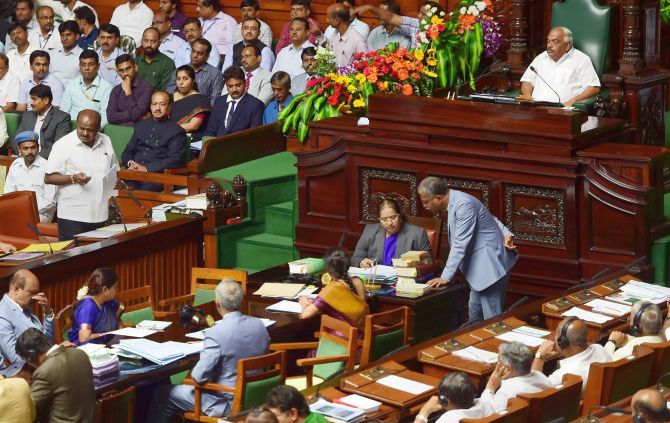 As the House debated the motion with frequent scenes of pandemonium, the Congress made its intentions clear right from the beginning that voting be deferred as the apex court was seized of pleas by two Independent MLAs on the issue of trust vote.

The Supreme Court will hear on Tuesday a fresh plea of two Independent Karnataka MLAs, seeking holding of the floor test "forthwith" in the state assembly on the trust motion.

The MLAs who withdrew support to the ruling coalition have sought a direction to the Kumaraswamy government to conduct the floor test on or before 5 pm on Monday.

Speaker K R Ramesh Kumar adjourned the House at 11.45 pm after repeatedly reminding the government it should honour its commitment to conclude the trust vote proceedings on Monday itself, but an unrelenting Congress created a ruckus towards the end of day's proceedings.

Kumaraswamy and deputy chief minister G Parameshwara were not present towards the end of proceedings, when Congress legislature party leader Siddaramaiah told the speaker, "100 per cent.. voting can happen tomorrow."

The speaker, who seemed perturbed over the prolonged proceedings, stated categorically that the discussion would end by 4 pm on Tuesday and by 6 pm, the voting process would be completed.

Serving a warning to the rebel MLAs, sequestered in a Mumbai hotel, senior minister D K Shivakumar reminded them that they would face disqualification if they did not turn up before the speaker on Tuesday in response to his notice.

Twenty MLAs, including 17 from the ruling coalition, skipped the proceedings on Monday, besides two Independents and Bahujan Samaj Party member N Mahesh, who is supporting the government.

Maintaining composure throughout, Bharatiya Janata Party members made repeated pleas to the speaker to conclude the process on Monday itself without dragging it any further.

The assembly was adjourned for nearly two hours as Congress and JDS members demanded more time to discuss the confidence motion after the speaker asked them to wind up quickly so that the trust vote process could be completed. 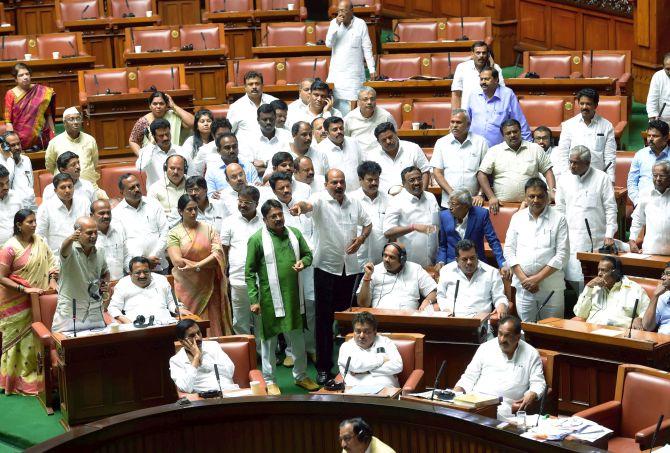 Senior Congress leader H K Patil insisted that the trust vote process should be completed after the Supreme Court decision and asserted "This is not a full House," with rebel MLAs confined in Mumbai and not able to attend the session.

"Let the MLAs return back," Patil told the speaker, as the Congress and JDS members shouted slogans, "let the Supreme court decide" and "save the Constitution", creating a ruckus.

Intervening, Kumaraswamy said the two Independent MLAs had approached the Supreme Court on the trust vote issue. "If they had faith in you, why did they approach the Supreme Court?" he asked the speaker.

"We had agreed to conclude the trust vote process on Monday, but in the light of developments in the Supreme Court and with several MLAs wanting to speak, give us more time," Kumaraswamy told the speaker.

Kumaraswamy also said that a fake letter with his forged signature that he had resigned was being circulated.

"Similar rumours about me also," said the speaker.

As the House met after an hour's delay in the morning, the speaker made it clear, "Everybody is watching us. Please don't make me a scapegoat. Let us reach our goal," stressing that the process should reach finality on Monday.

Kumaraswamy had moved the confidence motion on Thursday to decide the fate of the Congress-JDS government, rocked by rebellion by a section of its MLAs threatening its survival.

The debate on the confidence motion prolonged to Friday, with the ruling coalition defying the two deadlines set by Governor Vajubhai Vala -- to complete the process by 1.30 pm on Friday and later by the end of the day. 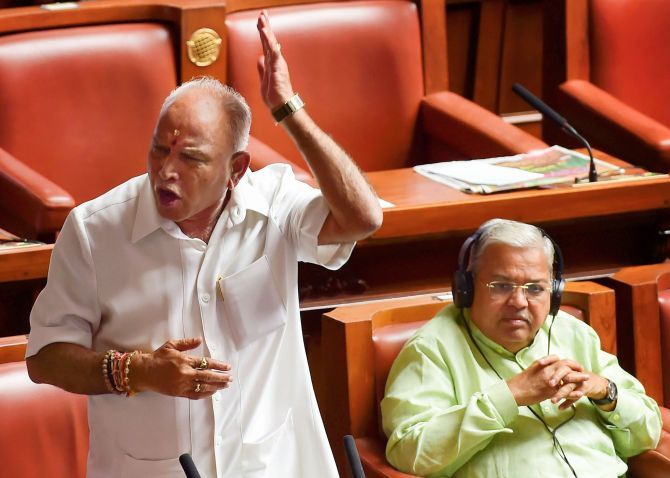 The proceedings were adjourned till Monday after the speaker extracted a commitment from the government that the process would be completed by Monday itself.

"It will not bring respect to the House or to me," the speaker made his position clear, implying that the trust vote should not be delayed further, amid reports that the ruling coalition had sought two more days time for voting.

The Congress' position was earlier stated during the debate by senior minister Krishna Byre Gowda, who said taking up the voting without the Speaker's decision on the MLAs resignation issue would leave the confidence motion process without any sanctity.

"We are in an extraordinary situation... I request the chair to decide on the resignation first. Or else, it will (confidence vote) will have no standing," Gowda said, as the debate on the trust vote dragged on for the third day.

"Is the resignation voluntary and genuine. Aren't they against democracy?" he asked.

Mounting an attack on the BJP-led government at the Centre, Gowda charged that there was a "systematic effort" to eliminate the "political opposition" in the country and the operation in Karnataka by BJP was part of such an attempt.

The BJP suspects that the voting is being delayed by the Congress-JDS government only to buy time to win back the rebel MLAs, whose resignations have pushed it to the precipice.

The governor had shot off two missives to the chief minister, setting deadlines on Friday to conclude the proceedings, expressing fear that the delay only gives rise to the scope for horse-trading.

He had also pointed out that he has "prima facie satisfaction" that the government has lost its majority.

Senior BJP leaders Jagadish Shettar and Madhuswamy told the speaker that the confidence motion should be completed Monday itself and debate should not be dragged on endlessly.

The dpeaker also on Monday gave a ruling that a legislature party leader has the right to issue a whip.

"Issuing whip is your right.Following them is left to the MLAs. If any complaint comes to me, I will follow rules and take a decision," Kumar told Congress Legislature Party leader Siddaramaiah, who had raised a point of order on the issue of whip in the light of the Supreme Court order last week. 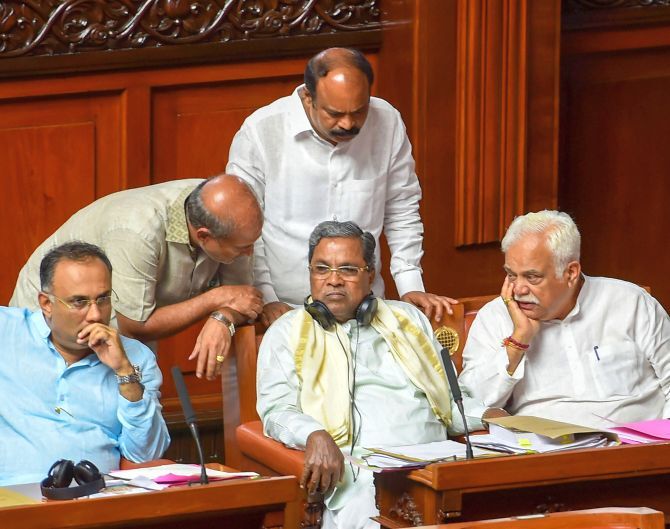 When the confidence motion was moved on Thursday last, Siddaramaiah had pressed for deferring it till the Speaker decided on the issue of whip in the wake of the apex court verdict on the political crisis in the state.

Siddaramaiah had said that the rebel MLAs were influenced by the apex court order that they can abstain from attending the assembly proceedings and asked the Speaker to give a ruling on the fate of the whip issued by him as CLP leader.

Seeking to exert pressure on the government, the BJP on Monday asked Kumaraswamy "to resign and go" if he has faith in the Constitution and people of the state.

The BJP said Kumaraswamy himself moved the confidence motion, but the trust process was still prolonging.

In its Facebook page, the BJP said, "If at all you have faith and respect for the Constitution and the people of the state, you resign and go home.

As many as 16 MLAs -- 13 from the Congress and three from JD-S-- had resigned, while independent MLAs R Shankar and H Nagesh withdrew their support to the coalition government, pushing the government to the precipice.

One Congress member Ramalinga Reddy retracted from his decision to resign, saying he would support the government.

With the support of the two independents, the BJP has 107 MLAs in the 225-member House, including the nominated MLA and Speaker.

If the resignations of 15 MLAs (12 from Congress and three from JD-S) are accepted or if they stay away, the ruling coalition's tally will plummet to 101, reducing the government to a minority. 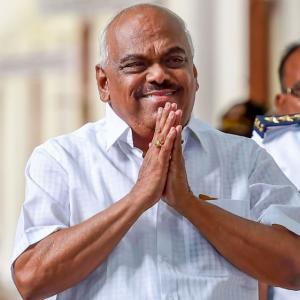