The judicial custody of sacked Uttarakhand minority panel chief S S Namdhari and nine others, arrested for their alleged roles in the murder of liquor baron Ponty Chadha and his brother in a shootout, was extended till Friday by a Delhi court.

Metropolitan Magistrate Anu Aggarwal extended by a day the judicial custody of Namdhari, his PSO Sachin Tyagi and eight others after they appeared in the court through video conference.

Their judicial custody was extended for a day only as the investigating officer (IO) could not reach the concerned court in time and reached it only after it had risen for the day.

The IO accordingly had to appear before the court of Duty Magistrate Aggarwal before which the accused were produced through video conferencing.

It has also extended the judicial custody for Namdhari's men Simranjeet Singh and Jagbir Singh custody till Friday.

The crime branch of the Delhi police had booked Namdhari for allegedly killing Ponty Chadha's younger brother Hardeep. Tyagi, a constable with the Uttarakhand police since 2005 and deployed as Namdhari's PSO since January 2012, was also arrested for his alleged role in the crime.

Ponty and Hardeep, who had an ongoing property dispute, were killed in a shootout at their Chattarpur farmhouse in New Delhi on November 17 afternoon, after which the police has arrested altogether ten persons including Tyagi and Namdhari in various criminal cases linked to the incident. 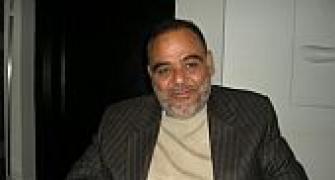