United States Senator John F Kerry -- President Barack Obama’s nominee to be the next Secretary of State -- has asserted that he would be strongly opposed to any cuts in America’s considerable aid to Islamabad.

Kerry also argued that Pakistan has not been given enough credit for its assistance in helping to eliminate Al Qaeda leader Osama bin Laden.

Testifying before the Senate Foreign Relations Committee as part of his confirmation hearing, Kerry made these comments in response to a question from Senator Rand Paul, Kentucky Republican, who asked if he would support conditioning aid to Pakistan on the release of Dr Shakeel Afridi.

Dr Afridi had helped the US administration locate bin Laden at his compound in  Abbottabad, Pakistan. A team of Navy SEALS had, in a special operation, gunned down the world’s most wanted terrorist on May 1, 2011.

Kerry, whose confirmation next week to succeed Hillary Clinton is expected to be a slam-dunk, said, “First of all, I have talked directly to President (Asif Ali) Zardari and I have talked directly to General (Ashfaq) Kayani about Dr Afridi. And like most Americans, I find it, as you do, incomprehensible if not repugnant that somebody who helped find Osama bin Laden is in jail in Pakistan. That bothers every American.”

But when Paul asked if he didn’t believe that Afridi was helping Americans, Kerry acknowledged, “He clearly knew what he was doing in that, because they also make the argument that he was doing that as a matter of regular course of business for him.”

“Now, that said, that is no excuse. I am simply explaining to you that rather than cut aid, which is a pretty dramatic, draconian, sledgehammer approach to a relationship that really has a lot of interests -- you know, we have our ground line of communications, which is the military's complicated word for ‘roads,’ that go to Afghanistan, and that route is critical to our supply of our troops, we have -- in addition to that, had intelligence cooperation.”

Kerry disclosed, “Our folks were able to cooperate on the ground in Pakistan. That's one of the ways we were able to get Osama bin Laden.”

In this regard, he bemoaned that “I don't think the Pakistanis have, frankly, gotten credit sufficiently for the fact that they were helpful. It was their permissiveness in allowing our people to be there that helped us to be able to tie the knots that focused on that, to some degree -- not exclusively, obviously, but to some degree.”

Kerry, who authored a legislation along with Republican Senator Richard Lugar and former House Foreign Affairs Committee chairman Howard Berman that led to Pakistan receiving $7.5 billion over five years, also noted that the Pakistanis “have lost nearly 6,000 people just in the last year in their efforts to go after terrorists.”

“They have lost about 30,000 people over the course of the last several years because they have been willing to engage the insurgencies. And so, you know, there are things that the Pakistanis have done, as complicated as the relationship has been,” he added.

Kerry reiterated, “I intend to raise the issue of Dr Afridi with them. I can promise you that. But I am not going to recommend, nor do I think it is wise, for American policy to just cut our assistance. We need to build our relationship with the Pakistanis, not diminish it.”

The longtime Massachusetts lawmaker and former Democratic presidential candidate also attempted to dilute the concern over China’s aggressive military modernisation programme as a means to flex its muscles in the Asia-Pacific region. He argued that the US military presence and bases in the region could by the same token be perceived by Beijing as a containment policy.

Kerry said he “could envision a way in which China could play a much more significant role as a partner in any number of efforts globally.”

He acknowledged, “We will be competitors in the economic marketplace, but we shouldn't be viewed as adversaries in some way that diminishes our ability to cooperate on a number of things.”

Kerry argued, “China is cooperating with us now on Iran. I think there might be more we could perhaps do with respect to North Korea. There could be more we could do in other parts of the Far East. And hopefully we can build those relationships that will further that transformation. We make progress. It's incremental. You know, it's a tough slog. And there just isn't any single magic way to approach it.”

“But if we can find a better sense of the mutuality of our interests and the commonality of goals that we could work towards -- climate change is an example. So we have got to get these folks as part of this unified effort, and I intend to work very, very hard at trying to do that,” he said.

Kerry argued that he was not “convinced that increased military ramp-up is critical yet. I am not convinced of that. That is something I would want to look at very carefully when and if you folks confirm me and I can get in there and sort of dig into this a little deeper.”

The hearing was a veritable love-fest, with Democratic Senators lavishing Kerry with a surfeit of kudos, while Republicans were equally effusive, although some of them did ask him some tough questions on Iran, Syria, and the fiasco in Benghazi, which resulted in the killing of US Ambassador in Libya Chris Stevens and three others Americans by militants apparently allied with the Al Qaeda.

Among those invited to testify in favour of Kerry’s nomination was Clinton, who said, “John is the right choice to carry forward the Obama administration's foreign policy, and I urge his speedy confirmation.”

She said, “He will bring a record of leadership and service that is exemplary. He has a view of the world that he has acted on, first as that young, returning veteran from Vietnam who appeared before this committee through the time that he served with such distinction as its chairman.”

Clinton continued, “He has been a valued partner to this administration and to me personally. He has fought for our diplomats and development experts. He understands the value of investing in America's global leadership.”

“John has built strong relationships with leaders in governments here and around the world, and he has experience in representing our country in fragile and unpredictable circumstances. He was in Pakistan and Afghanistan a few years ago, and we were consulting over the phone,” she said.

Clinton declared that Kerry, “is a determined and effective representative of the United States -- He has been so as a senator, will be so as the Secretary.” 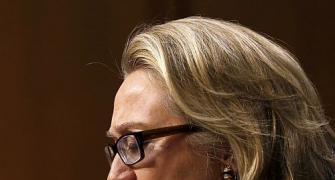 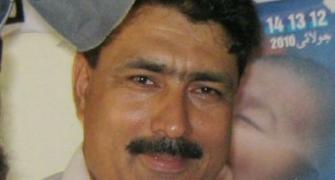 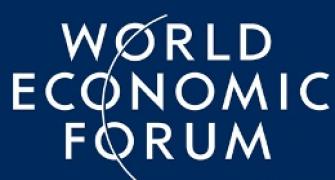 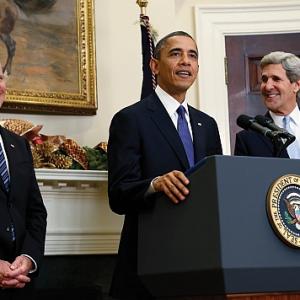