Agitating students dubbed the move as an 'eyewash' and decided to continue with the strike. 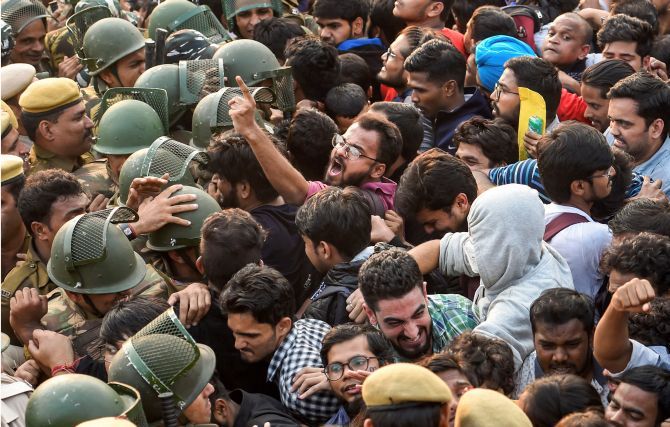 Facing intense agitation for over two weeks, Jawaharlal Nehru University on Wednesday rolled back the hostel fee hike partially for below poverty line students not availing any scholarship, a move which failed to satisfy agitating students who dubbed it as an 'eyewash', and decided to continue with the strike.

The EC meeting was shifted outside the campus at the last moment fearing trouble by agitators.

On Monday, the students had gheraoed All India Council for Technical Education building, the venue for varsity's convocation, forcing Union HRD Minister Ramesh Pokhriyal to stay put for six hours.

The students of Jawaharlal Nehru University (JNU) have been demanding withdrawal of service charges of Rs 1,700 which were introduced from next session and the one-time mess security fee, which is refundable, has been hiked from Rs 5,500 to Rs 12,000.

As per the decision, there is no change in the fee for non-BPL category students as well as BPL students availing a scholarship.

The EC also decided to remove the provisions for curfew timings and dress code from the hostel manual as demanded by students.

'JNU Executive Committee announces major rollback in the hostel fee and other stipulations. Also proposes a scheme for economic assistance to the EWS students. Time to get back to classes,' Subrahmanyam had tweeted.

However, the students' union of the varsity rejected the move as a 'sham propaganda' and 'selective usage of facts'.

'We reject this sham propaganda and selective usage of facts which is an eyewash. The HRD secretary while announcing the so-called roll back has the arrogance to advise us to: 'go back to classes'. With the fee hike still in place, not only students will be going out of classes but also out of JNU,' the Student Union said in a statement.

The agitation will continue, it added.

The varsity's teachers association also termed the changes as 'cosmetic'.

A JNU Teachers' Association (JNUTA) representative said, 'There is a no roll-back but only cosmetic changes have been made.'

The representative added they do not consider the EC legitimate since eight members were not present owing to the administration not informing them about the change in the venue of the meeting.

Later, the varsity issued a statement giving details of the charges.

The students under the category will have to pay only 50 per cent of the utility charges (water and electricity) and service charges (mess charges, sanitation charges and supporting staff services).

A senior university official, explained, that students will have to produce a valid BPL certificate to avail the concession.

According to a varsity official, the changes will be effected from the 2020 academic session and those belonging to BPL will have adequate time for producing BPL certificates. The varsity will be following the recent norms for BPL.

The students from Left-backed political outfits have been protesting against the hike in hostel fees for almost a fortnight.

The students had gathered outside the convention centre on the campus but, to press their demands effectively, shifted their protest to the administration block, which houses the vice chancellor's office and the office of other senior administration officials, on Wednesday.

Beating their 'daflis' (timbrels), they shouted slogans against the JNU administration and the vice chancellor.

The EC also decided to do away with a few clauses that had drawn the ire of students.

The Draft Hostel manual, which was approved by the Inter-Hall Administration Committee on October 28 had a clause which said, "The residents should be back in their respective hostels latest by 11.00 pm or by half an hour after time for library closing, whichever is later.

"Students who are found outside their respective hostel premises after the stipulated time and involving in any violence or otherwise disturbing the peace on campus and privacy of JNU community will be evicted from hostel forthwith apart from any other disciplinary action by the University."

This will not be part of the manual as well.

"All residents and guests should come to the dining hall appropriately dressed," the new manual had said. This has also been done away with.

The JNU Teachers Association, which also participates the EC meetings, also alleged they were not informed about the change in the venue to the office of the Association of Indian Universities near ITO and therefore, could not attend it. 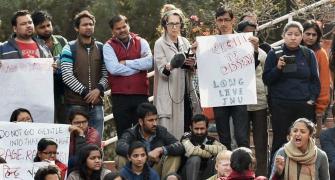