'Once our voices are crushed, they can bring in an agenda of privatisation.'
Ritwik Sharma reports. 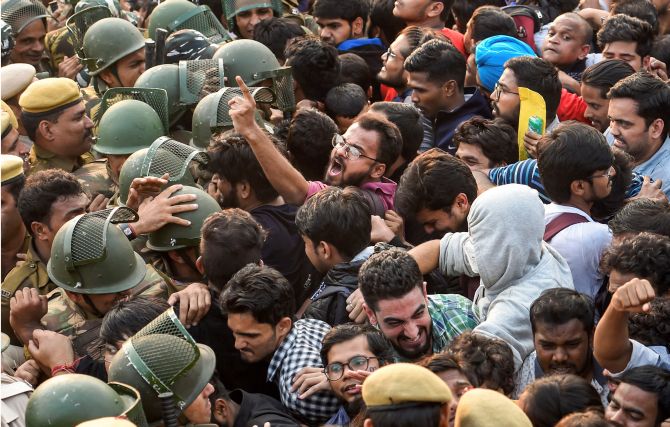 A new hostel manual has brought Jawaharlal Nehru University to a standstill.

Protests have continued for nearly four weeks, on its famed campus and elsewhere in Delhi city with instances of students as well as teachers being lathi-charged by the police.

Since early 2016, starting with a sedition row, right-wing propaganda including by sections of the government and the media have painted JNU as a den of 'anti-national' troublemakers.

It is a period when JNU's current Vice-Chancellor M Jagadesh Kumar took charge.

His tenure has witnessed several protests against measures that have been viewed as antithetical to the progressive character of the university.

Now, for the students at one of India's leading liberal arts higher learning centres in its golden jubilee year, a proposed fee hike in the manual has come as the proverbial last straw.

If implemented, the hostel fees could nearly double to over Rs 60,000 annually.

The previous week, JNU's executive council had announced a partial rollback in the fee for students categorised as being below the poverty line. It also removed the dress code prescriptions and curfew timings from the manual.

However, students are against differential fees and also now demand nothing less than the removal of the VC, who they allege is pushing a majoritarian agenda.

As the protesters negotiate with a government committee formed by the human resource development ministry, the fee hike issue has triggered debates on funding of higher education in India and drawn support for JNU students from other institutes as well.

Saket Moon, vice-president of the JNU Students Union, says the VC has not been in favour of a dialogue.

"We have reached a sort of impasse with the current administration because of which the MHRD (ministry of human resource development) had to step in," says the 26-year-old MPhil student at the Centre for the Study of Discrimination and Exclusion.

After graduating from his hometown in Nagpur, he studied ancient history after enrolling in a master's course at JNU in 2014.

The government changed that year, but JNU was still a quiet place.

That changed after the event commemorating the death anniversary of Parliament attack convict Afzal Guru on February 9, 2016, which was followed by the arrest of JNU students for sedition.

He adds that since 2016 there has been an administrative agenda to transform JNU and the ongoing row has been three years in the making.

"When a student went missing, the administration remained apathetic. Every semester we have been fighting a different battle. We couldn't get the seats cut repealed (2017-2018) because it was a UGC direction. We also fought against a compulsory attendance rule and for reinstating the GSCASH (Gender Sensitisation Committee Against Sexual Harassment, which was replaced with the Internal Complaints Committee)," Moon says.

Although universities are mandated by law to constitute the internal complaints committee, in JNU it has become a flashpoint with students and teachers alleging the administration of facilitating political appointments and questioning its neutrality.

Moon adds that the ongoing protests are a culmination of a lot of things that were brewing.

"Institutional functioning has deteriorated in the tenure of this VC."

In the hostel manual introduced last month, the administration raised the double room monthly rent from Rs 10 to Rs 300, the single room rent from Rs 20 to Rs 600 and the refundable mess security deposit from Rs 5,500 to Rs 12,000.

The room rents have been reduced by half for BPL students.

In a statement, the university explained that it has a deficit of more than Rs 45 crore (Rs 450 million) largely due to the electricity and water charges and the salaries of contractual staff.

If the decision comes into effect, it might leave students like Amrit Raj with no option but give up his academic endeavours.

An MPhil student at the School of Arts and Aesthetics, the 25 year old relies on a non-NET (National Eligibility Test) scholarship of Rs 5,000 a month.

His father is a peasant.

The family is mainly dependent on his mother's monthly earning of 19,000 as a shiksha mitra (primary schoolteacher) at their village in Muzaffarpur.

His younger sister studied at a government school and is now enrolled in college.

The family could afford to send his younger brother to a private school in Patna, but it costs them Rs 15,000 a month.

"How will I ask my parents for money?" he asks.

"We sign an undertaking to not take up any job when we accept scholarships. I am the only one from my village to aspire to do a PhD. If I leave, others in my village will also get discouraged," Raj says. 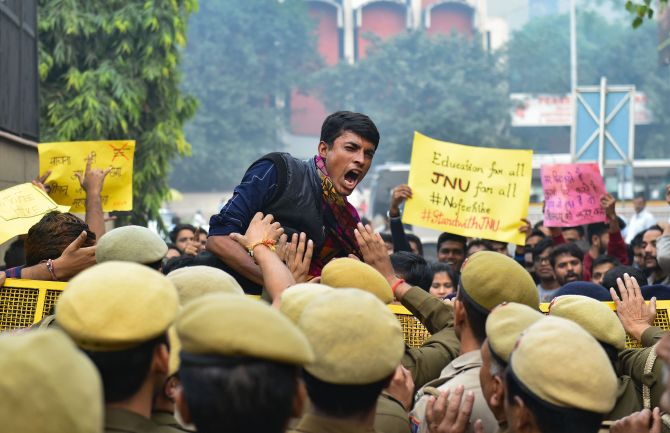 IMAGE: Police stop JNU students who were staging a protest over the hostel fee hike outside the UGC office in New Delhi. Photograph: Arun Sharma/PTI Photo

Students believe that JNU's admission policies provide a level playing field to aspirants from diverse backgrounds and regions of India.

A points system awards those who have studied in government schools, such as Raj; women and students from OBC (Other Backward Classes) families are given 'deprivation points', although these have been discontinued for MPhil and PhD students from 2017-18.

Because of its admission policies, JNU has boasted of a healthy ratio of women and students from marginalised groups.

Students point out that at the MPhil and PhD levels their intake has been hit after the deprivation points were done away with.

They are opposed to a system of variable fees, arguing it would only widen differences as an economically better-off student might view a BPL student as a 'freeloader'.

Anagha Pradeep, a councillor representing the School of Social Sciences, says a publicly funded university such as JNU should be accessible to everybody, and concessions such as a differential fee structure only deny many a right to education.

"Postgraduate students from families with income below Rs 144,000 get monthly scholarships of Rs 2,000. It is hard even then to convince families who do not want to spend on education of women. A lot of women students in JNU are not supported by their parents," says the 23 year old whose parents run a small-scale textile firm and send money to her from Kannur.

"So it will be very difficult for such women students to sustain an education in JNU under a revised fee structure as proposed by the IHA (Inter-Hall Administration), as we will be asked to study at our home towns and spend less rather than coming far away to Delhi," Anagha adds.

The new hostel manual also lists no policies pertaining to reservation in room allotment, students claim, saying that it betrays an exclusion of economically backward groups.

Madhurima Kundu, who is studying for an MPhil at the Centre for the Study of Regional Development, adds that JNU has made it possible for students to survive for days with scant money at a time that fees are being revised in several campuses and adversely affecting the poorer sections.

"This is the kind of education we are seeking everywhere. The fee structure made it possible for students from all across India to come to JNU and exchange their stories. As a result, the institution became a voice for the entire country," says the economics student who is nursing injuries in her right forearm after she was beaten up by policemen at a protest march.

The fear on campus is that the government and the administration want to suppress the voices of student resistance.

"Once our voices are crushed, they can bring in an agenda of privatisation," says Kundu. Cops beat me after I told them I'm blind: JNU student 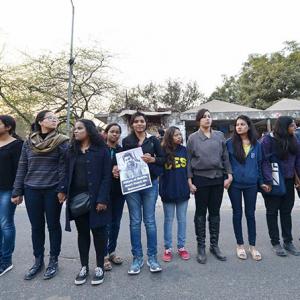