Cops beat me after I told them I'm blind: JNU student

After accusing the police of baton-charging them for protesting on the streets of Delhi against hostel fee hike, students of Jawaharlal Nehru University alleged that even physically challenged protesters were not spared and women were groped and manhandled. The police, however, have denied lathi-charging, using tear gas or any form of violence against students.

Shashibhushan Pandey, a visually challenged student, claimed that police beat him up even when he told them he is "differently abled", while JNU Students' Union president Aishe Ghosh alleged that women students were "manhandled and groped" by male policemen.

Addressing a press conference in the university campus, Pandey said, "I removed my spectacles to show them that I can't see. Still they beat me up. A student who intervened was also beaten up."

"My friends told me street lights had been switched off and police were beating students. They made me stand on the side of a road, but policemen started nudging me with lathis from behind," Pandey said.

He alleged that he was thrown on the road and when he told the police that he is "visually challenged", he reportedly got to hear, "If you are blind, why have you come here to protest".

"India is fighting to save public education. The Centre wants to cut JNU off the mainstream," Pandey said.

Other students also narrated their ordeal at the press conference.

"When I was detained, my kurta was pulled and I was picked up by four male policemen. Women students were literally groped and manhandled," Ghosh said.

Ghosh said they are protesting a draft hostel manual which does not have clauses for reservation of SC/ST/OBC in hostels.

"It has provision for 10 per cent fee hike every year and the salaries of contractual workers will be paid from the charges being levied on us," she stressed.

The Jawaharlal Nehru University Visually Challenged Students Forum demanded an apology from Delhi Police and said they will begin a protest against police atrocities from Wednesday. 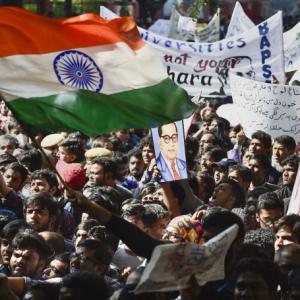 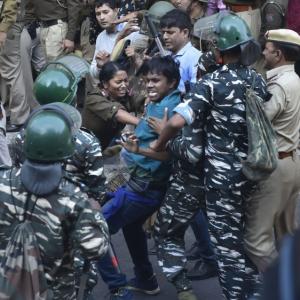