PM turns down Ramesh's offer to quit over China comment

Environment Minister Jairam Ramesh, who has been under fire over his comments on the home ministry's stance on China, has offered to resign, sources in the government said on Thursday.

Sources said Ramesh's offer to put in his papers has been turned down by Prime Minister Manmohan Singh.

Ramesh got into trouble after he criticised the home ministry of being 'overly defensive' and 'alarmist' in its approach towards the entry of Chinese companies in India, while on a visit to Beijing last week.

Ramesh, while talking about the India-China warmth developed during the Copenhagen Summit on Climate Change, had suggested that the home ministry needed to be 'much more relaxed' in its approach to Chinese investments in India.

He was severely criticised by the Bharatiya Janata Party for raising issues pertaining to national security, while the prime minister warned him against making remarks about the functioning of other ministries.

Ramesh had tried to clarify his statement in a letter to Congress president Sonia Gandhi and Dr Singh soon after his return from Beijing on Monday, but it failed to cut ice.

Chidambaram had written a strongly-worded letter to Dr Singh, expressing unhappiness over his Cabinet colleague's remarks that his ministry was putting 'needless' restrictions on Chinese investments.

After receiving letters from Chidambaram and Ramesh, Dr Singh had spoken to the latter and told him that he should not have commented on the functioning of other ministries.

Dr Singh had told Ramesh that it was "advisable for Cabinet colleagues not to make comments on the functioning of other ministries, especially with regard to relationship with important neighbours like China," according to PMO sources.

"There is no confusion in our policies towards China and we continue to strive for constructive engagement with Beijing," Dr Singh had told Ramesh.

On Wednesday, Ramesh had met Home Minister P Chidambaram to purportedly apologise for his comments and make peace with the senior minister. 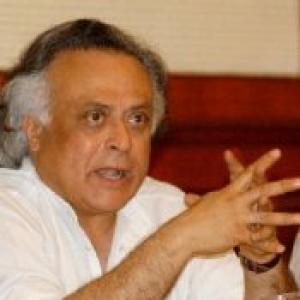