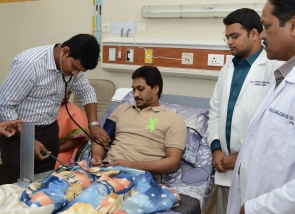 YSR Congress President Jaganmohan Reddy, who was admitted to a hospital on October 9 after being forcibly evicted by police from the site of his fast to protest bifurcation of Andhra Pradesh, was discharged on Saturday.

Jagan left for home from the Nizam's Institute of Medical Sciences in Hyderabad in the morning following improvement in his health condition. He was, however, advised rest for a few days, sources said.

He was shifted to the NIMS on late Wednesday night, the fifth day of his hunger strike, from his fast camp and forcibly given fluids with police help.

The police evacuated Jagan from his indefinite hunger fast venue after doctors voiced concern over his deteriorating health. A team of policemen swooped down on Jagan's house in the posh Jubilee Hills area, lifted him and put him in an ambulance.

The Kadapa MP began his indefinite fast on October 5 in support of united Andhra Pradesh and doctors had advised that he should call it off since his blood sugar levels and other parameters were worrisome.

The YSR Congress president had undertaken an indefinite fast while in jail last month on the same issue and was forced to break it then, too, after he was hospitalised. The 40-year-old politician, who is facing corruption charges, was released on bail late last month.

Image: Doctors examine Jagan at the Nizam's Institute of Medical Sciences in Hyderabad on Friday 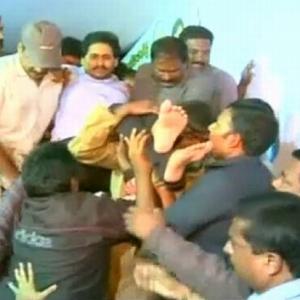 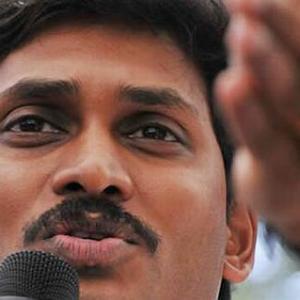 Key Congress leaders cozy up to Jagan in Andhra