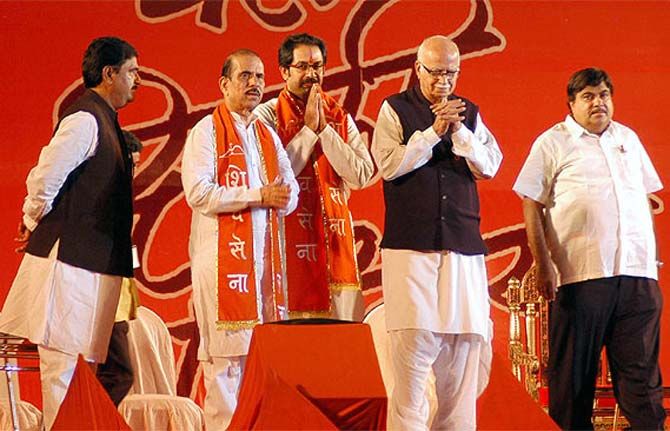 The 25-year-old Bharatiya Janata Party-Shiv Sena alliance split on Thursday amid continued deadlock over seat-sharing for the October 15 Maharashtra assembly polls. After several rounds of talks over the last few days, senior state BJP leaders announced this evening severing of the ties between the two parties, blaming Shiv Sena's "inflexibility" for it.

"We have conveyed our decision to snap ties to the Shiv Sena. The decision was taken with a heavy heart," Maharashtra BJP chief Devendra Fadnavis told reporters after a meeting of the state party's core committee.

The BJP, however, hinted at the possibility of a post-poll alliance with its estranged ally, saying the party would not criticise the Sena during the campaign and remain friends.

"Our aim is to prevent the corrupt Congress-Nationalist Congress Party government from coming to power. We will not criticise Shiv Sena during the campaign, we don't want any bitterness with our ally of 25 years," Leader of Opposition in the assembly Eknath Khadse said.

Fadnavis said the BJP will go to polls with smaller 'Mahayuti' allies. He said BJP had worked out a seat-sharing deal with Mahadeo Jankar's Rashtriya Samaj Paksha and Raju Shetty's Swabhimani Shetkari Sanghatana.

“Our talks with Vinayak Mete of Shiv Sangram are in final stages and we will also speak to RPI's Ramdas Athawale, Fadnavis said.

"We reiterate that the Shiv Sena is still our friend. We will not criticise the Sena and our target will be the corrupt Congress-NCP combine," he said.