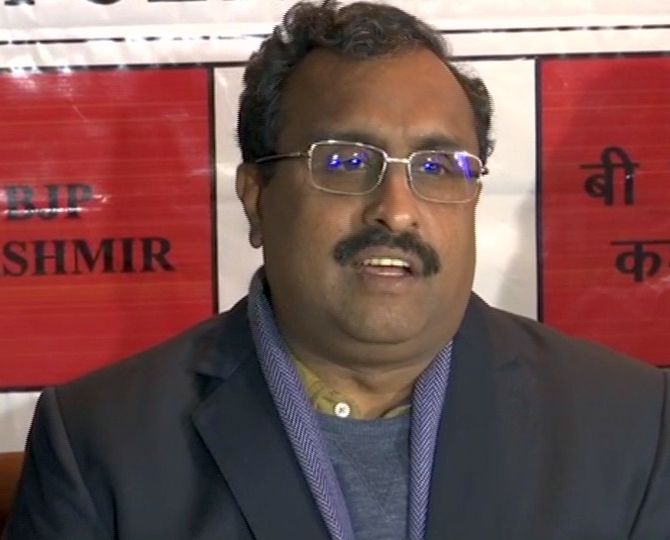 Internet facilities were snapped on August 5 ahead of Union Home Minister Amit Shah announcing the repeal of Article 370 and bifurcation of Jammu and Kashmir state into two union territories.

"The broadband internet services are being restored in phased manner. The facilities have been restored to the hotels," Madhav told reporters in Srinagar.

He said the local administration will restore the broadband services in more sectors after a security review.

"We will also press the local administration to ensure maximum power supply in Jammu and Kashmir as the indications are there that the winter is going to be very harsh," he added.

Asked if the mainstream politician would be released any time soon, the BJP leader said some leaders have been released and some have been shifted to their homes from detention centres.

"It is an ongoing process," he added.

Madhav said he had come to Kashmir to watch the football match between Real Kashmir Football Club and Chennai City.

"I am RKFC fan and I am happy that they won. I hope they win the remaining matches as well and lift the trophy this year," Madhav said.

Talking on Citizenship Amendment Act, Madhav said neither the CAA nor the National Population Register has any link with the National Register of Citizen and alleged that the Opposition is carrying out a false propaganda to malign the Prime Minister Narendra Modi-led government.

Seeking to dispel fears that the Citizenship Amendment Act is against Muslims, he said in the past too India has granted citizenship to those fleeing persecution in their native countries.

The Union cabinet, headed by Modi, on Tuesday cleared the proposal for updating the NPR. The database would contain demographic as well as biometric particulars of every resident in the country.

Opposition parties, including the Congress, have alleged that the NPR is the first step of the NRC.

"The prime minister has made it clear that there is no link between the CAA or the NPR and the NRC. It is premature to discuss what will happen when NRC comes... so far, there has been no discussion on the NRC," Madhav told reporters.

Asked about the link between the CAA and the NRC drawn by Union home minister Amit Shah in the past, the BJP leader said, "The prime minister has clarified the position only two days ago."

Madhav said a false propaganda has been unleashed by the opposition parties to malign the BJP-led government at the Centre as they have no issues to raise.

"NPR is a routine exercise which was first started by the UPA government in 2010 but had to be reviewed in 2015 as the first exercise was not extensive. NPR is an extension of the Census which will be next held in 2021," he said.

Madhav said the government needs to update its data so that the benefits of its policies reach the intended beneficiaries.

"People keep migrating from time to time. Some people living in Srinagar five years ago might have moved to Jammu and those in Jammu might have moved to Delhi and elsewhere. The updated data is needed for benefitting the people, especially the poor and the downtrodden, from the policies of the government," he said.

Speaking about the CAA, Madhav said, "When (Indian-origin) people started fleeing Uganda during the rule of Idi Amin, we granted citizenship to them. CAA is just a similar provision."

"We are otherwise also granting citizenship to those who desire, if they fulfil the required criteria. Adnan Sami was granted citizenship," he added.

Madhav refuted allegations of high-handedness by police in the handling of anti-CAA protests in Uttar Pradesh.

"There was no high-handedness by police. They have acted as per the powers they have got... many police personnel have been injured while dealing with the violent protests," he said.

"Rest is false propaganda," he added.

According to the CAA, non-Muslim refugees who came to India till December 31, 2014, to escape religious persecution in Pakistan, Bangladesh and Afghanistan will be given Indian citizenship.

Protests erupted across the country, starting with the northeast, after Parliament passed the Citizenship Amendment Bill earlier this month.

As many as 19 people have been killed in Uttar Pradesh alone as protesters clashed with police during demonstrations against the legislation, which, critics allege, discriminates on the basis of religion.