News
Business
Movies
Sports
Cricket
Get Ahead
Money Tips
Shopping
Sign in  |  Create a Rediffmail account
Rediff.com  » News » 'He was haunted by India'

'He was haunted by India' 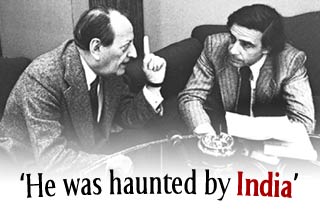 In Malraux, his riveting biography of one of the most acclaimed men of the 20th century, French journalist Olivier Todd seeks to unmask Andre Malraux, the French writer, hero of the Spanish Civil War and a passionate lover of India.

Malraux, a cabinet minister under French President Charles De Gaulle, was drawn to Indian philosophy and tradition. While Todd concedes Malraux was a good novelist and an inspiring man, he argues the Frenchman, hailed by many as a Renaissance man of the 20th century, was always creating lies and myths about himself.

Todd (seen above, right, with Malraux, left) had plenty to tell Senior Editor Arthur J Pais in a telephone interview, about India, a prominent theme in his book on Malraux.

"Before we talk about Malraux, I want to tell you something," Todd said from his apartment in Paris. "It's about my daughter."

Did you not adopt her when she was a baby in India?

I stumbled across a reference to her when I was doing research on you. How old is she?

She is 23. She is the apple of my eye. Now that I have completed another book, it is time to go to India with her.

Has she been to India before?

No, but I have been, especially to do research on Malraux. I wanted to take her to India when she was old enough to understand what India is and would not get shocked by its poverty. I could have taken her to India several years ago but things got postponed. Many parents take their adopted children to their native countries when they are about eight or 10. Often this shocks the children too much. I did not want that to happen to my daughter.

Does she have an Indian name?

Her French name is Aurelia but I have an Indian name for her: Deepika. You don't have to make a song and dance about this but I am convinced she is the best of my five children. I tell her it is because she does not have my genes. She laughs her head off when she hears me say it.

Malraux talked extensively about India and in his autobiographical Anti-Memoirs. He devotes about 100 pages, nearly one-fifth of the book, to India. Why are you so upset with his preoccupation with India?

He was too much into pseudo-philosphy. He was not interested in ordinary Indians. He did not look around doctors and engineers who were making a difference. He did not write about the way women were badly treated in India. He was more interested in the gods and philosophy.

What else could he have written?

Abstract non-violence, as opposed to...?

The great amount of violence in India in the 1950s. There was infanticide of girls, there were dowry deaths. His grip on the human India, unfortunately, was via its great leaders, Mahatma Gandhi and (Jawaharlal) Nehru.

That made you wonder.

I wondered if he was doing it because of diplomatic, literary or philosophical politeness? Or simply blindness?

You wrote the book more than four years ago. What do you think now?

I have the same questions. But I also feel it was all of the above.

How would you describe his fascination for India?

He was haunted by India. Though all civilisations to him seemed equal, India was more equal than some. Long before he had by the time he started looking up India seriously (in the mid 1950) he had been disillusioned with Communism and China. India then held a special fascination.

But Indians liked him, isn't it?

Oh, yes. He was a very charismatic person. I am not saying his quest was not real. But he was a hollow man, and while many fell for his charm, there were some who saw through him in no time.

Who are some of these people?

What did Singh dislike about Malraux?

Like I have written in my book, Khushwant who interviewed Malraux in 1958 thought he was like a firecracker. Lots of noise and sparks when lit and only smoke a few moments later.

Who are some of the Indians who liked Malraux?

There were many who were living in confusion, some of them had studied and worked abroad. They were searching for a strong assertion of their identity, and Malraux's writing about India's greatness and legacy appealed to them.

How about Raja Rao, the philosopher and novelist?

They pandered to each other. Rao was interested in spirituality and he had lived in ashrams for several years. He had taught in France. He became Malraux's guide when he visited India in 1958.

Raja Rao adored Malraux and he has written extensively about his admiration for the Frenchman. Did you interview Rao for your book?

I sought him out but got no response. Rao could not always get Malraux to listen to him. Rao wanted Malraux to meet with Rao's guru in Trivananthapuram but Malraux declined the invitation. Malraux remained agnostic despite his fascination for India and the Vedas.

How did Malraux's relationship with Nehru evolve?

Malraux was at the beginning of his career as a cabinet minister. It was important for him to be associated with men who had accomplished something on a big scale. Nehru was one person, he admired. Another was John F Kennedy.

Malraux wanted it that way. During the first two days of the visit to New Delhi, he stayed at the Hotel Ashoka. Two days later, Nehru invited him to stay at a government palace.

What made the two men get along with each other?

There were many similarities and common interests, including literature. Both waited long to gain power. But there was nothing deep about their friendship. Malraux admirer Raja Rao writes about him telling Nehru in Paris in 1930 that the latter should work towards becoming free India's leader.

Rao's account of the meeting was too forceful. Nehru and Malraux needed each other, perhaps the former needed the latter more because Malraux was close to Charles De Gaulle.

You quote philosopher Jean-Paul Sartre claiming the life of a dead man is unguarded and anyone can walk straight in.