News
Business
Movies
Sports
Cricket
Get Ahead
Money Tips
Shopping
Sign in  |  Create a Rediffmail account
Rediff.com  » News » 'It is important for me to go back to India as much as possible' 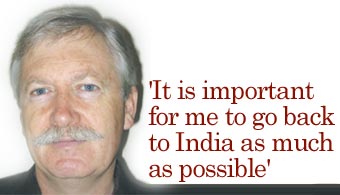 Stephen Alter's compelling work Elephas Maximus, A Portrait of the Indian Elephant, beguiles readers at many levels. It is partly a travelogue that takes us to wildlife preserves, to an elephant auction and makes us relive the Ganesha festival in Mumbai.

It is also a richly detailed memoir. Alter, whose father was a missionary in Mussourie and ran the Woodstock School there, was raised in India before he came to America for college studies. The book, while examining conservationists' efforts to save the Indian elephant, takes time to discuss, delicately, the elephant's emotions and sexuality.

A writer-in-residence at the famed Massachusetts Institute of Technology, he maintains a home in America and India with wife Ameeta, son Jayant and daughter Shibani.

Elephas Maximus is published by Hartcourt, one of the finest publishers in America. Penguin will publish the book in India in a few weeks.

Alter, author of Sacred Waters, A Pilgrimage up the Ganges River to the Source of Hindu Culture and four novels, including Renuka, spoke to Senior Editor Arthur J Pais recently.

Why would someone in Berkeley or New Orleans want to read a book on Indian elephants?

Everybody I have met has an elephant story, even if they haven't seen one in real life. The connection between human beings in India and elephants is unique. At the Guruvayoor Temple (in Kerala), priests told me how much they cared for the temple elephants, and that the elephants came first. Then, their families.

Also Read: The Elephants of Guruvayoor

Readers in other parts of the world would be interested in elephant folklore, the dangers these majestic animals face, and the efforts taken to save them.

Elephants have a place in the American imagination, isn't it?

An elephant is an animal that seems part of our culture in America too. Elephants are featured in many films and books.

Especially in the movie Elephant Boy?

I write in my book about the film starring Sabu in the title role. Strangely, though Sabu, an elephant boy in real life, became an international star and is still remembered in America [nearly six decades since the film was released], not many people remember him in India. The film did not show Indians in good light but the elephants and Sabu held quite a bit of appeal. Sabu was smart. He made sure he became a well-paid star in Hollywood.

What kind of travel was involved for the book?

Writing the book gave me an opportunity to visit wildlife sanctuaries and forests across India, especially in Tamil Nadu and Karnataka that I had never visited before. At the Periyar Tiger Reserve (in Kerala), I encountered elephants while I was on my feet, and not seated in a jeep. It was an interesting experience, like the elephant and I were sharing common ground.

Does your family understand your need for extensive travel?

My daughter Shibani teases me that I write these books on India because I want to go back home and travel across the country.

I think it is, to an extent. I want to go to India every year. Often when I see a plane, I think of being on it, on the way to India.

Why don't you write about circus elephants?

There is often quite a bit of cruelty involved in training the animals. I did not watch the cruel training. I also do not know why animals, especially elephants, should be tortured, even if their circus acts make children happy.

But you are not averse to the zoos?

Though I think visiting a zoo is a contrived experience compared to seeing animals in the wild, I have enjoyed visiting some zoos. Zoos can bring people close to animals and nature. You need to spend quite a bit to visit animal sanctuaries and national parks.

What has been your most interesting zoo visit?

happened to be at the Sanjay Gandhi Biological Gardens, once known as the Patna Zoo, during a Marxist Leninist convention with the theme Red Revolt. At a break during the convention, hundreds of Marxists went to the zoo and enjoyed the sight of animals immensely.

Some waved the red flag at me.

When I spoke to them in Hindi, they immediately asked if I was Russian! When they realised I was American, there was some consternation but they were apparently more interested in enjoying the sight of animals and the greenery around.

Watching the delegates enjoy the zoo, I began to think of the egalitarian pleasures they offered to everyone. For five rupees, I had seen in an hour more animals than I had observed in all my trips to national parks and wildlife reserves.

The zoo visit has an interesting subtitle. What is it?

Marx at the Zoo. It was one of my more memorable experiences while working on the book and helped me change my thinking about zoos.

You grew up in a missionary family. And yet you were not restricted about knowing other religions. Tell us about it.

There was a certain amount of insularity in the missionary families but my parents were very much open to culture outside our community.

What kind of missionaries were they?

There are different kinds of missionaries. To some conversion is everything. But my parents believed in doing well and making life better for people in some form or the other. Their attitude left me with the options to explore interacting with Indian friends from different backgrounds.

How did that exploration go?

I read a lot about Hinduism and other religions. I was always interested in stories, and I read a lot of folk stories, stories from religious books.

I realised early on that knowing more about Hinduism was very natural for anyone interested in the Indian landscape, history, people and culture.

Give us an example.

When you go to the top of a mountain, and someone points to the Gangotri, you want to learn more about it. Every little town and village in India has something to do with religion and tradition.

No. If I were further pressed, I am happy to say I am an atheist. But I believe in spiritual experiences, especially through nature. When I went on the padayatra [recounted in Sacred Waters], I had a spiritual experience. I approached the yatra as a pilgrimage. I did not eat meat or drink alcohol during the journey.

Why did you go on the yatra?

It is an Indian tradition, isn't it? A padayatra helps one to be with nature and with people. It is a humbling experience when one discovers the importance of nature and how we have to depend on a lot of things in nature. The mystical and spiritual experiences associated with such yatras make one humble.

I was inspired to make this pilgrimage by the examples of Mahatma Gandhi and environmentalist Sunderlal Bahuguna who marched from Kashmir to Kohima to publicise his cause.

Do you travel alone when working on your books?

Mostly, yes. Occasionally Ameeta and the children join me. But given our conflicting schedules, it is likely I travel alone. When I went on the padayatra, I wanted to be alone as much as possible because of the contemplative quality of such a journey.

You grew up in India but your parents came from America. What was it when you came to America for your college studies?

I was terribly homesick. Even today, I miss India a lot.

That is why it is important for me to go back as much as possible.

What did you miss most when you first came here?

I missed my family, for one thing. I missed Mussourie, especially the landscape. I began missing the pace of life in an Indian hill station. Back home, one did not call anyone ahead -- at least in small towns -- when one visited friends and family members. That spontaneity was missing here.

What can a writer learn from an elephant?

Elephants are known to have a phenomenal memory, isn't it? Though I find the claim a bit exaggerated, it is important for all writers to work on their memories. As a fiction writer, though, you need a perfect as well as an imperfect memory.