An ex-Army jawan escaped death in the Gyaneshwari Express tragedy, but five of his relatives who were sleeping in the S-5 coach of the ill-fated train were crushed to death.

"Five of my family members died as the goods train rammed into the passenger train were their berths were located," he said, sitting on the side of the tracks at Sardiha, as rescuers lifted the mangled coach from the tracks.

"Insomnia saved me. I grabbed a chain hanging from a side berth and was hanging from the top as the train tilted. All my co-passengers fell from the berths on the floor. Within a couple of minutes, the goods train smashed all of them," he said.

Banerjee, a resident of Hoogly district in West Bengal, was on his way to attend a sacred thread ceremony in Rourkela when the derailment took place. The victims are his brother-in-law Debjan Mukherjee, 35, his wife Ananya Mukherjee, 28, their son Ribon Mukherjee, 5, Banerjee's sister-in-law Chaitali Mukherjee and her daughter Papri Mukherjee,13.

"I reached the emergency exit and came out. Outside, it was pitch-dark. Only sounds of groaning, cries and shrieks of pain were audible around the mangled coaches of the train," Banerjee, who was in berth 64, recounted.

He approached berths 33, 34, 35, 36 and soon realised that his relatives had been killed in the accident. Their bodies were later extricated. 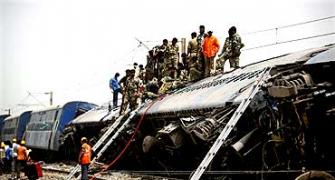 Survivors' tales: 'All of us have escaped death'
PCPA denies involvement in train accident
Are Naxals in touch with LeT?