75 injured in clashes in curfew-bound Kashmir

Clashes in curfew-bound Kashmir on Friday left 75 persons injured, most of them security personnel.

Protesting mobs defied strict curfew restrictions in capital Srinagar and other towns clashing with police and paramilitary, Central Reserve Police Force troops deployed across the Valley in strength to enforce the curfew.

A police spokesman said 69 police and CRPF personnel were injured in Friday’s clashes. He said the clashes occurred in capital Srinagar and major towns in north and south Kashmir after the Friday prayers.

The spokesman also said in past few days 192 persons including 109 policemen and 73 CRPF personnel were injured in various incidents of clashes in south Kashmir alone. “Ten civilians were also injured in the stone pelting incidents.”

He said that 103 vehicles most of them belonging to the police and CRPF were damaged by the stone pelting mobs in south Kashmir.

Security forces on Friday enforced a strict valley-wide curfew to stymie the protests and violence in Kashmir which has been on boil after the killing of a youth in north Kashmir’s Baramulla town early this week.

Kashmir valley has been in the grip of protests and fierce clashes triggered by the death of the 24-year old student Tahir Rasool Sofi in alleged firing by the army in Baramulla town Tuesday.

Hundreds of people joined the ‘fourth day ceremony’ of Tahir in Baramulla town during which mobs raised anti-India slogans.

Kashmir has been in the throes of a long spell of shutdowns and protests ever since Afzal Guru, the 2001 Parliament attack convict, was hanged on February 9 in Tihar jail in New Delhi.

Around midnight on Thursday night, thousands of police and paramilitary CRPF troopers moved in the capital city and other major and minor towns to enforce a strict curfew in view of the separatist call for protests after Friday prayers.

Police jeeps were heard making announcements in capital city regarding imposition of curfew and warning people not to venture out and stay indoors.

The security forces had laid coils of razor fitted wire on the roads and thoroughfares to block the pedestrian and vehicular movement.

Separatist conglomerate Mutaihida Majlis-e-Mashawarat which is spearheading the current phase of protests and shutdowns had called for post Friday prayer protests in Kashmir.

Police has been conducting nocturnal raids in the city and other towns rounding up alleged stone pelters.

The hard-line separatist leader, Syed Ali Shah Geelani, who returned to Valley on Thursday, has been placed under house arrest. 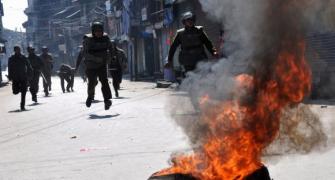 PHOTOS: Curfew in parts of Kashmir; 22 injured in clashes 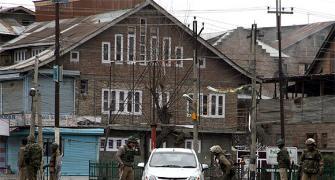 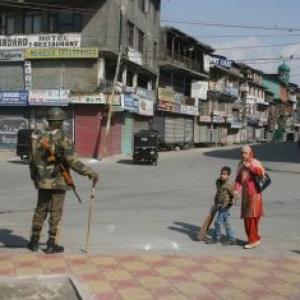