The Indian Consulate in Shanghai has announced the suspension of in-person consular services as China's gleaming business hub with 26 million people struggled amidst mounting COVID-19 cases, putting the country's dynamic zero-case policy to the test. 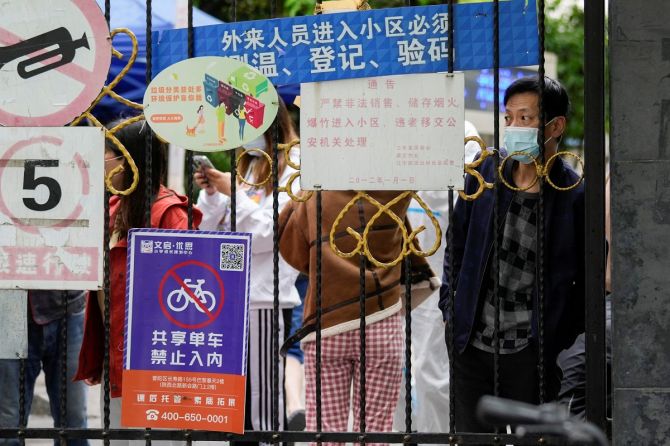 IMAGE: A resident waiting for a food delivery looks out from behind a gate blocking an entrance to a residential area under lockdown amid the COVID-19 pandemic, in Shanghai, China April 13, 2022. Photograph: Aly Song/Reuters

Indian citizens in Eastern China Region may apply at the Embassy of India, Beijing for availing urgent consular services, the Consulate said in a notice issued on Tuesday.

"As the City of Shanghai continues to remain sealed and controlled in different degrees by the Shanghai Municipal People's Government, the Consulate General of India will remain inaccessible and will not be in a position to provide consular services in person,” said the notice posted on the Mission's official website.

“During the period, the consulate will remain operational in remote mode and may be reached for any consular emergency,” it said, providing the mobile and phone numbers to contact the staff.

In-person services refer to extension of passports, attestation of documents, among other such works.

The Consulate's notice came as Shanghai, China's biggest city, continues to reel under the massive spread of the Omicron variant, prompting officials to continue the lockdown.

China's other provinces too have reported an increasing number of cases. Jilin province reported 233 cases, followed by 22 in Guangdong, 14 in Hainan and 12 in Zhejiang, it said.

In all, 26,525 asymptomatic cases have been reported in the country with the majority of them from Shanghai, the Commission said.

“New cases have not peaked yet, and it will still be some time before a dynamic zero-COVID goal can be achieved,” Meng Tianying, a senior executive at Shanghai-based consultancy Domo Medical said.

“The central government and local authorities will have to re-examine the strategy used to contain the outbreak, after more than a week of citywide lockdown and mass testing exercises,” Meng told the Hong Kong-based South China Morning Post.

Though the Indian Consulate in Shanghai has suspended in-person services, it is providing much needed help, including counselling to over 1,000 Indian nationals currently based in the city, Consul General D Nandakumar said.

Currently, around 22 members of the consulate staff are functioning from their homes, Nandakumar told PTI in Beijing.

While there are no reports of cases among the staff and the Indian diaspora, the Consulate is in touch with the community members through the neighbourhood committees to provide ambulance services as well as transportation to the airport through designated agencies.

As the city officials supplied food and vegetables to millions of people under lockdown, the Consulate through the local government is trying to arrange the Indian groceries to be distributed to Indian families, Nandakumar said.

Shanghai is trying to contain the spread of the coronavirus cases, mostly that of the Omicron variant, by imposing strict lockdown from March 28 and mass testing.

Besides building a host of temporary hospitals to accommodate the surging numbers of cases, China also pressed over 30,000 health workers mostly from the military to deal with the crisis.

There has been growing discontent over the prolonged lockdown, South China Morning Post reported on Wednesday.

“There have been harrowing reports of people screaming from their homes over the prolonged confinement, as well as food shortages, unmet medical needs and pets bludgeoned to death by zealous pandemic workers,” the report said.

“While Shanghai's outbreak shows no sign of subsiding, there are also concerns for another COVID-19 hotspot, 2,000 km away in the northern province of Jilin. Its capital Changchun has been in lockdown since March 11, when 160 local infections were reported,” it said.

On Tuesday, the US ordered non-emergency government staff at its Shanghai consulate to leave the city due to tight lockdown to contain a COVID-19 surge.

China sharply criticised the US move, saying the local government has provided foreign diplomatic and consular personnel in China with assistance and convenience to the maximum extent possible.

“We deplore and reject the US' politicisation and instrumentalisation of the issue of personnel departure. We have made solemn representations with the US side. The US should immediately stop attacking China's anti-epidemic policies, stop political manipulation under the pretext of the epidemic and stop smearing China,” foreign ministry spokesman Zhao Lijian told the media in Beijing on Tuesday. 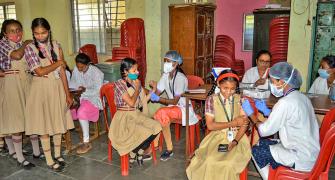 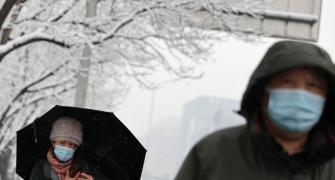 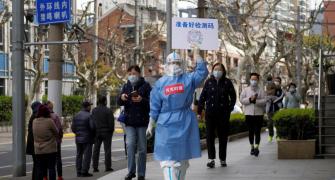 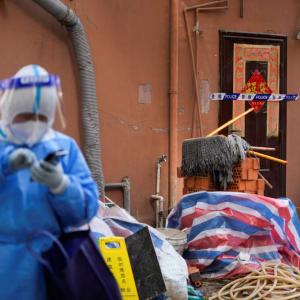 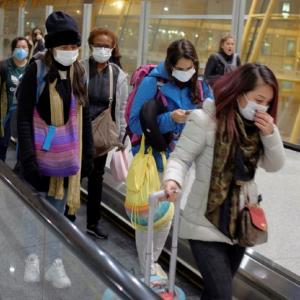