India's outreach effort at the UN 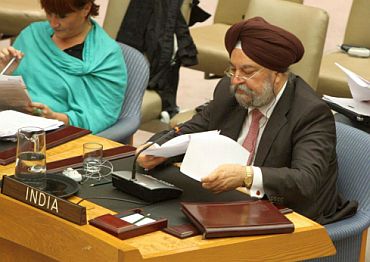 Ahead of taking its place on the big table at the United Nations Security Council from January next year, India on Friday made an outreach effort inviting over two dozen journalists from the mainstream American media, including the New York Times, the Wall Street Journal and the Washington Post, at a working luncheon to get its point of view on the UN reform process across.

The first such luncheon-meeting organised by India's Permanent Representative to the UN Hardeep Puri at the mission headquarters had some two dozen journalists from the mainstream media and a few from the ethnic India media as well.

Surprisingly, for the first time in nearly 18 years, a Pakistani journalist, veteran UN correspondent of Pakistan's Dawn newspaper, Masood Haider, was invited to the luncheon briefing.

'I am particularly happy my friend from Pakistan from the Dawn newspaper is here. He was telling me that the last time he came here, he was kept outside, and I see no reason for that,' Puri said in a lighter vein in his opening remarks.

"I will talk to my Pakistani counterpart; this has to be a two-way process from now on," Puri later told rediff.com.

Puri fielded some of the most difficult questions from mainstream correspondents ranging from Iran, to Myanmar and UN Security Council reform and what India's role is going to be from next year, with ease.

In response to a question whether Pakistan's vote for India was a quid pro quo for India's support for Islamabad's bid for the non-permanent seat on the Security Council in 2012, Puri parried a direct reply.

"Pakistan backed us on the day of the voting and I can assure my Pakistani friends that India will let it be known much ahead of time," Puri said. 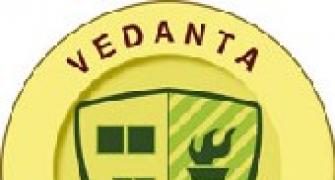 UNSC's price: India may have to send troops abroad