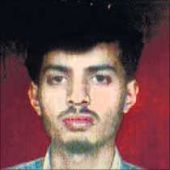 Is it the end of India's most wanted terrorist Riyaz Bhatkal? Underworld don Chota Rajan has claimed that his aides have killed Riyaz Bhatkal and an associate of his, Anwar, at the Gulshan Iqbal area in Karachi, Pakistan.

The Intelligence Bureau, the Mumbai Anti Terrorism Squad, the Karnataka police and his relatives in Bhatkal, Karnataka when contacted said that they are looking into this and are yet to ascertain the claim made by Rajan.

His relatives in Bhatkal told rediff.com that even if this news were to be true, they would not get information so soon. However, no confirmation regarding this has come as yet.

Bhatkal was wanted in a spate of bomb blasts which rocked India in the past couple of years. He was co-founder of the Indian Mujahideen and had masterminded the deadly blasts at Jaipur, Bengaluru, Ahmedabad and Delhi.

Soon after these blasts he fled to Pakistan, which was confirmed by the IB last year. The confirmation came after the IB tracked the call records of some of his associates and when the voice samples were matched they were sure that it was Bhatkal on the other side. The calls were also traced to Karachi where Bhatkal was residing.

Bhatkal, whose actual name is Riyaz Shahbandri, worked under the alias of Sharukh Khan while in India and in Pakistan changed his name to Dilawar Iqbal.

Bhatkal started off his journey into the crime scene in his hometown of Bhatkal. He began his terror spree by acting as an informer in this coastal town in Karnataka, which is communally charged.

His crime sheet states that he used to pass on information for a few bucks to both communities who were at loggerheads since time immemorial at Bhatkal.

His capabilities to arrange for men and provide accurate logistics made him an instant favourite with Pakistan spy agency Inter Services Intelligence and he was handed over the charge of setting up of the Indian Mujahideen. Pakistan-based Amir Reza helped Bhatkal in this venture.

Image: A photograph alleged to be of Riyaz Bhatkal, one of India's most-wanted men, obtained from police records.