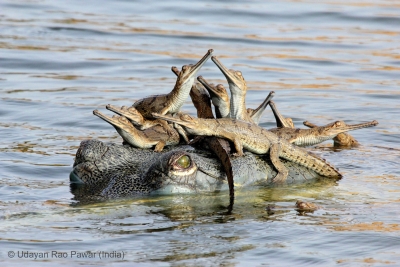 A 14-year-old Indian boy, who camped out overnight on the banks of the Chambal River in Madhya Pradesh to click the winning shot of a crocodile, has bagged  this year's Young Wildlife Photographer of the Year Award'.

Udayan Rao Pawar shot the fresh water crocodile or gharial with hatchlings on its head by creeping up on the nestling colony. "When the dawn broke early in the morning I hid myself behind a rock, and when the morning light came I took those images," he explained.

"I could hear them making little grunting sounds. Very soon a large female surfaced near the shore, checking on her charges. Some of the hatchlings swam to her and climbed onto her head. Perhaps it made them feel safe," he added.

Despite conservation efforts, the fresh water gharial is on the verge of extinction with an estimated 200 mating pairs remaining as a result of illegal sand-mining and fishing.

Judge Tui De Roy, a naturalist and wildlife photographer, said in reference to Pawar's image, "The composition and timing of Udayan's photograph is perfect.

The mother's gaze seems directed at you, appealing to you to let her live and thrive in peace. This image is beautiful and thought-provoking, but at the same time wonderfully playful."

The awards are one of the most prestigious competitions in world photography, held annually by the NaturalHistoryMuseum and BBC 'Wildlife Magazine' in London.

This year's Wildlife Photographer of the Year is South African artist Gred du Toit, who won over the judges with his photograph of an African elephant from Botswana.

The winning portrait has been 10 years in the making, as Du Toit has been photographing elephants for a decade in search of the perfect shot. "I chose elephants because I feel a very special energy and connection when I'm around them," he told BBC News.

Images for the contest, now in its 49th year, are submitted anonymously by professional and amateur photographers alike.

They are selected for their creativity, artistry and technical complexity and must be submitted as a raw file with no manipulations. 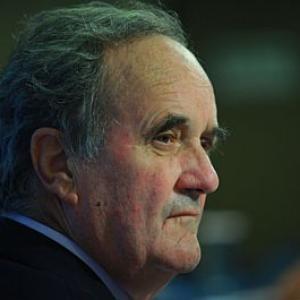 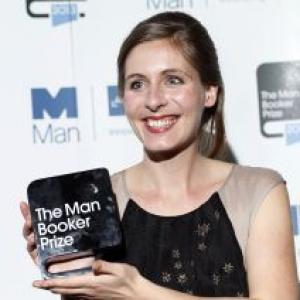