India has one of the world's lowest COVID-19 infection and death rates, Union Health Minister Harsh Vardhan said on Friday, underlining that the recovery rate among coronavirus-infected patients in the country is 63.45 per cent while the mortality rate is 2.3 per cent. 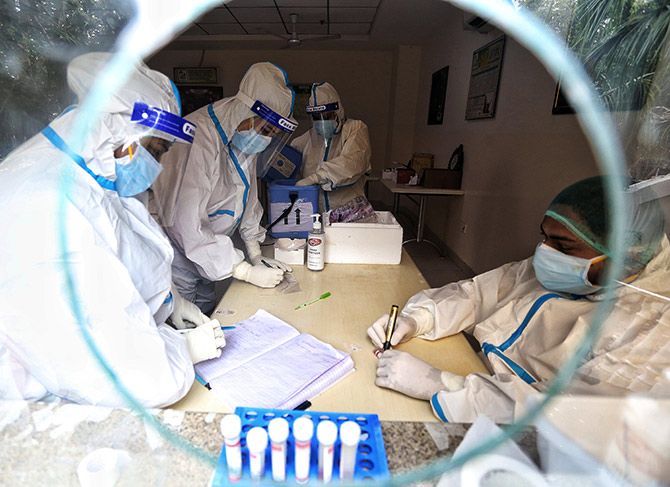 For the third day in a row, the number of COVID-19 recoveries in a 24-hour span saw another record high with 34,602 patients having recuperated. This pushed the total number of recoveries to 8,17,208, the Union health ministry said.

The death toll mounted to 30,601 with 740 new fatalities reported in a span of 24 hours, the ministry data updated at 8 am showed.

However, a PTI tally showed that there were 13,34,309 cases, with 31,353 deaths, according to the data provided by various state and Union Territory governments.

Speaking at the Shanghai Cooperation Organisation (SCO) Health Ministers' Digital Meet, Vardhan spoke about the results of the lockdown.

'At 864 cases per million and less than 21 deaths per million of our population, India has one of the world's lowest infection and death rates,' he said.

Vardhan also emphasised how the Indian traditional system of medicine has also contributed substantially in boosting the immunity of the general population during COVID-19, according to a health ministry statement.

'There is currently no institutional mechanism within the SCO to discuss cooperation in traditional medicine that has the potential to fulfil the WHO Traditional Medicine Strategy 2014-2023 and also reinforce the effective implementation of the joint statement on cooperation in combating epidemics signed at the Qingdao Summit in 2018,' the statement quoted the Union health minister as saying.

"This is in spite of such complementary medicine systems being widely practised in all member states of our SCO," he said and proposed the setting up of a new sub-group on traditional medicine under the existing institutional meetings of the SCO for health ministers.

Expressing his condolences at the loss of lives across the world due to COVID-19, Vardhan described India's political commitment to contain the pandemic and spoke on how Prime Minister Narendra Modi has 'personally monitored the situation and ensured a pre-emptive, pro-active and graded response to prevent the deadly virus from spreading'.

He explained that a series of actions were initiated in a graded way and these included issuing of travel advisories, point-of-entry surveillance, community-based surveillance, enhancement of laboratory and hospital surge capacities, wide dissemination of technical guidelines on managing different aspects of the disease's outbreak and communicating its risk to the public.

The ministry said as a result of constantly growing number of recoveries, the recovered patients outnumber the active cases of coronavirus infection by 3,77,073.

There are 4,40,135 active cases of the coronavirus infection presently in the country.

'This difference is showing a progressively growing upward trend,' it said.

'This translates to 1,1179.83 tests per million (TPM) for India, which has seen a steady increase since the adoption of the 'test, track and treat' strategy,' the ministry said.

The rise in TPM has been achieved with a steady increase in the number of laboratories -- 1,290 so far -- and efforts by the Centre and state governments and union territory administrations to facilitate widespread testing through an array of options, it noted.

As for the country registering an increasing number of recoveries, the ministry said that efforts of states and union territories are bolstered by central teams of experts sent to high caseload areas and through strategic discussions held by the central government through video conferencing with state and district officials.

'With the dedicated efforts of healthcare workers, the recoveries are improving and case fatality is continuously falling, which currently stands at 2.38 per cent,' the ministry said.

The sustained rise in number of recoveries is the result of a well formulated and executed strategy of containment of COVID-19 by state and union territory governments under the guidance of the Union government.

Also, the phase-I human clinical trial of India's first indigenously-developed COVID-19 vaccine candidate, Covaxin, began at the AIIMS here on Friday with the first dose of the injection given to a man, who is in his 30s.

Over 3,500 volunteers have already registered themselves for the trial at AIIMS since last Saturday, of whom the screening of at least 22 people is underway, Dr Sanjay Rai, Professor at the Centre for Community Medicine at AIIMS and the principal investigator of the study, said.