Terror threats, cyber attack, CWG had it all

Al Qaeda and Lashkar-e-Tayiba had planned to attack some venues of the just-concluded Commonwealth Games on October 12 and 13, prompting the government to put in place a four-layer security arrangement in the last three days of the sporting extravaganza.

Besides this, in a bid to destroy the highly-secured security structure, there have been hundreds of cyber attacks, suspected to be originating from China, to penetrate the computerised system and server during the Games fortnight.

A Western intelligence agency had tipped off the government on October 10 that Al Qaeda and LeT militants, trained along the Afghan-Pakistan borders, would try to attack a few venues and a hotel, government sources said.

Alarmed by the input, the government enhanced the security of the Games venues and village from three layers to four and brought additional forces, including armed commandos, to foil any attempt of sabotage even from air.

The intelligence input was very specific about the venues suggested that the militants would probably come from Middle East or Nepal or from across India's western border, sources said.

As the information had suggested that the terrorists may target a five-star hotel, security has been increased in eight leading hotels in Delhi. There was also information that terrorists may use paragliders to reach the venues prompting authorities to put in place anti-aircraft guns.

Credentials of all foreign nationals arriving in international airports were checked one-by-one and 20 Quick Reaction Teams were deployed besides keeping ready a special team of 40 army commandos near the sporting venues, including Jawaharlal Nehru stadium.

The government also enhanced security in 32 markets in Delhi by deploying around 1,200 additional paramilitary force personnel which were air dashed from Chandigarh, Jalandhar and a few other places to assist Delhi Police to guard business centres.

The sources said there have been hundreds of cyber attacks, originating mainly from China, to destroy the computerised security system put in place to guard the venues and village.

All athletes, officials, visitors and security personnel were given a highly-secured accreditation cards. One could enter the venues and village only after the computerised system screen him/her and gives a signal.

Had this computerised network collapsed in any such cyber attack, which was first launched within two hours after the opening ceremony begins, the whole security system would have gone wrong.

The government immediately set up a dedicated unit to counter the cyber attack and to design firewalls. 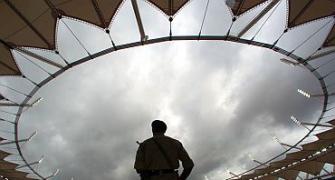 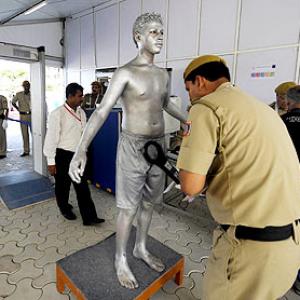