In gifting the submarine to Myanmar, India is competing with China for influence in the region.
Ajai Shukla reports. Kindly note the image has only been posted for representational purposes.

With New Delhi's announcement of the gift of a used submarine to Myanmar, India has played a high card in its long-running competition with Beijing for influence in that country.

The Indian Navy has operated INS Sindhuvir, a Soviet-origin Kilo-class submarine, since 1988.

Now, with its service life extended by 10 to 15 years in an overhaul at Hindustan Shipyard Ltd, it will serve the Myanmar navy till the 2030s.

'Cooperation in the maritime domain is a part of our diverse and enhanced engagement with Myanmar. In this context, India will be delivering a kilo class submarine INS Sindhuvir to the Myanmar navy,' the ministry of external affairs announced.

These purchases are being paid for through a line of credit that India has granted Myanmar.

In gifting the submarine to Myanmar, India is competing with China for influence in the region.

China had won the last round in 2017, when it sold Bangladesh two refurbished Type 035G Ming-class submarines for $203 million.

India regards the Myanmar relationship as vital since the two share a 1,640-km border, and several insurgent groups from Nagaland and Manipur have used Myanmar as a refuge.

New Delhi has wooed Naypyidaw (Myanmar's capital) to help in curbing the activities of militants from the north east.

India has also sought Myanmar's cooperation in pursuing the Kaladan multi-modal transit project, as a channel for conveying goods to Mizoram and the other north eastern states through the sea route.

This involves sending containerised goods, shipped from Indian ports, to Myanmar's Sittwe port. From there, the goods are shipped north up the Kaladan river to Paletwa, where an inland water jetty is to come up. The goods will be unloaded and shipped onwards by road.

The Kaladan project is also a route for conveying to India liquefied natural gas from Myanmar's Shwe gas project in the Bay of Bengal. ONGC-GAIL have signed a contract with Myanmar for this.

However, China scored over India in winning the project to build a port at Kyauk Phu. From here, goods are shipped northwards across Myanmar to China's Kunming province. 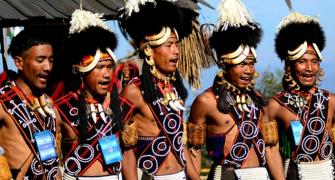