News
Business
Movies
Sports
Cricket
Get Ahead
Money Tips
Shopping
Sign in  |  Create a Rediffmail account
Rediff.com  » News » Why India must be tough with Myanmar

'If Myanmar falls to China, let it.'
'Sooner or later, the rulers of the country will have to call New Delhi,' asserts Nitin Pai. 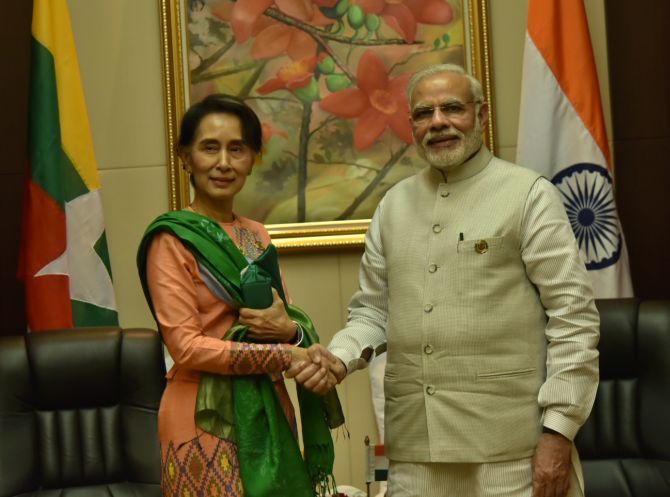 In part due to the political economy of British colonial rule and in part due to ethnic Bamar nationalism, Myanmar (earlier Burma) has always nursed an antipathy for Indian people and for the Indian State.

It is an old sentiment with its roots in the late nineteenth century, following the arrival of Indian moneylenders, middle-class professionals, and labourers into colonial Burma.

The antipathy was there when the British left in 1947-1948, and was reflected in the citizenship regulations of the post-colonial state.

Then, in 1962 General Ne Win came to power and sent hundreds of thousands of ethnic Indians packing with a mere 175 kyats per head in compensation.

Women were not even allowed to keep their mangalsutras. This exodus followed the ones in 1930, a particularly horrific one in 1942, and after the British left in 1948.

The contemporary expulsion of the Rohingyas is merely the latest in the series.

To this day, Indians -- regardless of their religion -- are derogatorily referred to as 'kalas' (aliens).

The Tamil community that remained in Myanmar, for instance, has been compelled to assume Burmese names, customs and language.

In 1948, 16 per cent of Burma's population was ethnic Indian. Today it is estimated at around 2 per cent.

In many respects, Myanmar is more like Pakistan (where the Hindu population fell from 15 per cent to 2 per cent in the same period) than like India, Malaysia or Indonesia.

What's worse, although Myanmar has a new constitution and a quasi-democratic system today, the dominant narrative remains one of a Bamar majoritarianism that is unwilling to accommodate even the half-dozen significant ethnic minority groups.

Notice how the Myanmarese State and society refuse to even acknowledge there being a people called Rohingya.

To be sure, none of this implies that all Bamars or Myanmarese are uniformly prejudiced against Indians. But rather, that anti-Indian prejudice is salient in a majoritarian political culture and manifests in state actions.

Realists can dismiss all this as the domestic affairs of another country,of little import to international relations.

However, at least since the Ne Win regime, Myanmar's governments have rarely perceived any congruence of interests with India.

Yes, since the late 1990s, the Myanmarese army, the tatmadaw, has cooperated with Indian security forces to act against insurgents. That should beg the question of why they were and are in Myanmarese territory in the first place.

For the past three decades, New Delhi's appeasement of Myanmar in order to promote our interests -- be it Look East, be it counter-insurgency, be it energy, be it balancing China -- has produced lacklustre results.

It is possible to list a number of 'under progress' projects in connectivity, energy and so on. But there is very little that counts as success.

India's foreign policy establishment has allowed itself to be played by the regime, between the carrots the latter dangles and FOLO, the fear of losing out (to China).

The truth is Myanmar is practically irrelevant to our Look East policy. Sea and air links are adequate, and easily expandable, to connect India to Southeast Asian markets.

Indian investors would rather invest in Bangladesh, Malaysia, Indonesia, Singapore and Vietnam than in Myanmar with its anti-Indian bias.

In the same year, Indians invested around $730 million, constituting a mere 1.4 per cent of the foreign direct investment in the country.

In comparison, Chinese investments of $18 billion constituted 34 per cent of the total FDI.

As far as cooperation in fighting insurgents goes, the Myanmarese are doing it because and only to the extent it is in their interests. Even here, Myanmar's role is often overstated, papering over the rampant collusion between the tatmadaw and various armed groups operating along the India-Myanmar border.

Then there is the FOLO. We often hear of how 'we can't allow Myanmar to fall into China's arms', totally ignoring the fact that Myanmarese or Bamar nationalism exists.

The elite in Myanmar have always feared being swallowed by India and China, and it's not as if Chinese domination is somehow more acceptable to them today.

New Delhi should stop seeing the region from the perspective of its own geopolitical insecurities.

Current policy has gotten it wrong. It's not that India must engage Myanmar to prevent that country from coming under Chinese dominance. It's that Myanmar needs India to prevent itself from being dominated by China.

It is unnecessary to indulge the military-majoritarian regime to the extent India has been doing.

If Myanmar falls to China, let it. Sooner or later, the rulers of the country will have to call New Delhi.

The Rohingya crisis has raised tensions between Bangladesh and Myanmar. This could turn into a longer political confrontation -- and possibly involve security forces of the two countries facing off each other.

It will be tempting for India to keep equidistant from the two countries: That would be a mistake.

Some contend that the Myanmarese being Buddhist are positively inclined toward India. History and experience suggests that there is little basis for such an assessment.

Indeed, despite its bipolar domestic politics where one party is pro-India and the other isn't, Bangladesh is already far more important to India than Myanmar could ever be.

New Delhi should back Bangladesh over the Rohingya issue and rally international support for Dhaka's efforts.

The Modi government must adopt a stricter approach towards Myanmar. Contrary to conventional wisdom, India can afford to.

Nitin Pai is co-founder and director of the Takshashila Institution, an independent think-tank and school of public policy. 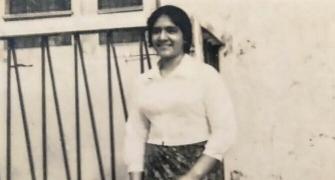 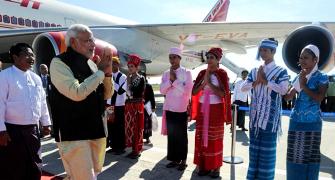 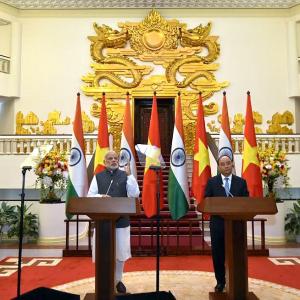