News
Business
Movies
Sports
Cricket
Get Ahead
Money Tips
Shopping
Sign in  |  Create a Rediffmail account
Rediff.com  » News » India cancels talks with Pak. Do you agree with the decision? 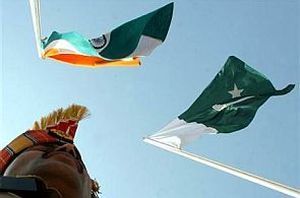 India has called off foreign secretary-level talks with Pakistan next week sending a blunt message that it was interfering in India's internal affairs by holding talks with Kashmiri separatists.

"At a time when serious initiatives have been taken by the government of India, the invitation to Hurriyat leaders raises question on Pakistan's intention. Prior to Pakistan High Commissioner's meeting with the separatists, the Foreign Secretary had told him that they can have dialogue either with India or separatists. Foreign Secretary Sujatha Singh's visit to Pakistan on August 25 stands cancelled," the ministry's spokesperson Syed Akbaruddin said.

Foreign Secretary Sujatha Singh was to travel to Islamabad on August 25 to hold talks with her Pakistani counterpart Aizaz Chaudhry, nearly two years after the Indo-Pak talks were stalled due to incidents along the LoC.